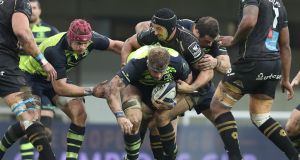 Leinster stand on the threshold of becoming the first team to reach the knock-out stages but do so they will most probably have to go through the pain barrier. It’s a far cry from this point a year ago, when they were winless.

Montpellier’s owner is Syrian-born billionaire Mohad Altred. His mother died on the day he was born and was reared by his grandparents before earning a scholarship at Montpellier University. He has described this as his club’s biggest game of the season thus far.

And lest there be any doubt as to their ensuing intentions, Jake White has brought over their heavyweight crew. Montpellier are locked and fully loaded. White makes only three changes to the side which accounted for Bordeaux-Begles last week, a win which elevated them to third in the Top 14.

With only three French players in their starting XV, Montpellier are not especially French but, then again, maybe they are.

With no less than a dozen South Africans in the Jake White-coached squad, Montpellier have been dubbed les langueboks. Four of them start tonight, including the huge boot of Francois Steyn at outhalf, along with three Georgians in an all-Georgian/South African tight five, as well as three Fijians, while their backrow of Fulgence Ouedraogo, Akapusi Qera and Pierre Spies carry a potent ball-carrying and offloading threat.

Perhaps with this in mind, Cullen and the Leinster think tank are deploying Jack Conan at blindside in a backrow deprived of Seán O’Brien due to a calf strain which is not expected to rule him out of next week’s trip to Castres.

James Tracy starts at hooker and Richardt Strauss is back on the bench in the absence of the hamstrung Sean Cronin, while after a week’s training Rob Kearney is recalled to the bench.

This is in part testimony to the fine form of the rookies, Adam Byrne and Rory O’Loughlin, on the wings as well, of course, as the remarkable Isa Nacewa. In his third European game, Byrne will have to somehow stop Nemani Nadolo, Montpellier’s human wrecking ball, all 6ft 5in (195cm), 21st 4lbs (135kg) of him.

Nacewa admitted that there had been specific focus on their tackle technique for Nadolo.

“He is one player you have to understand how he plays and how he carries the ball. As a backline, we would have all talked about his threat throughout the week. But Adam is a guy who has taken his opportunity and prepared well off the field. He does that every week and it’s consistent. He is as prepared this week as he is any other week.”

Leinster have won nine from nine at home this season, including three provincial derbies, but Nacewa, who repeated his assertion that Johnny Sexton will assume the kicking duties even if that didn’t work as he also stated when the sides first met in October, admitted that at face value this looks like being Leinster’s toughest home game of the season.

Not being especially French, the multinational Montpellier tend not to be soft touches on the road, as John Fogarty noted last week, and have won three of seven away games in the Top 14, in which they have won ten of their last 14 all told.

However, Montpellier have lost their last seven away games in the tournament, while Leinster have won 20 of their last 22 home games against Top 14 opposition, the exceptions being Clermont in 2012 and RC Toulon last season.

Thus history and the formguide point to a Leinster win.

To that end, while they’ll have to put their bodies on the line defensively, they’ll also need to generate the kind of quick tempo that is not especially commonplace in the Top 14.

Critical to generating quick ruck ball, as Fogarty also highlighted earlier in the week, is to improve their body positioning in contact compared to the first meeting, when Leinster rallied from 22-6 down to deny Montpellier a fourth try and earned a bonus point of their own – a two-point swing which looks all the more significant now.

If they move this lumbering Montepllier side around, they do have the skills set, invention and game management of Johnny Sexton to keep their eyes on the prize.