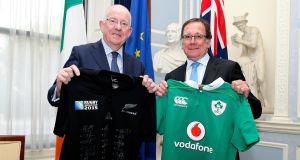 A senior figure in the New Zealand government has given his support to Ireland’s bid to host the Rugby World Cup in 2023.

Ireland’s all-island bid faces competition from France and South Africa, with a decision due to be made in November.

Speaking after a meeting with Minister for Foreign Affairs Charlie Flanagan in Dublin on Wednesday, New Zealand foreign minister Murray McCully said Ireland would be “a terrific place” to host the 2023 tournament.

Mr McCully, who was his country’s minister with responsibility for the Rugby World Cup, which it hosted in 2011, spoke of “the special character” that the event gained from taking place in “a smaller country with a true passion for rugby.”

At a joint press conference, Mr Flanagan said he had told Mr McCully of the “unique oportunity” the tournament offered Ireland, saying it would be “a very tangible expression” of positive North-South relations.

“The Irish bid team regularly refers to New Zealand’s hosting of the World Cup in 2011 as the inspiration for the Irish bid. That tournament was a remarkable success and demonstrated that a country of similar size to Ireland could successfully host this event,” he said.

While the decision on New Zealand’s preference rested with the country’s Rugby Union, Mr McCully said, he would “report faithfully the glowing credentials that have been outlined to me by my friend today, and I will do my best to ensure that that is fully recognised by the New Zealand Rugby Union when it makes its decision”.

He added: “I have made my position clear. I think that this would be a terrific place to host the Rugby World Cup.”

New Zealand has just concluded its own six-month period on the council, where it recently co-sponsored a landmark resolution, in which the United States abstained, condemning Israeli settlements in the West Bank.

“You know you have our support in that regard,” Mr McCully said of the Irish campaign.