Irish quartet all in reckoning, with Munster and Leinster each in control of own destinies 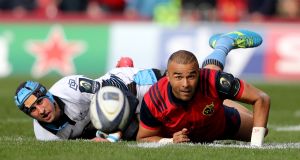 Irish prospects entering the penultimate round of pool matches in the European Champions Cup are altogether rosier than they were at this juncture last season. Optimism has replaced pessimism.

Then, Ulster were the only hope, and a slightly forlorn one at that. Now they are the most forlorn hope of the Irish quartet, with Leinster and Munster each in control of their own destinies and even Connacht are likely to keep their challenge for an historic quarter-final alive until the final game of the pool stages away to Toulouse on Sunday week.

As with holders Saracens and freescoring Clermont, Leinster and Munster can both secure quarter-final places after missing out last season with a game to spare this weekend. They would then each be in a position to secure a home quarter-final by winning their final games.

All that said and done, Saracens look best placed to do so, away to Scarlets, whereas Leinster face a physically huge Montpellier team, who will be drinking at the last chance saloon at the RDS on Friday night, while Munster are away to their nearest challengers, Glasgow, on their synthetic Scotstoun pitch on Saturday evening. Even Clermont will have their hands full away to Bordeaux on Sunday lunchtime.

In the same Pool Five, later that day, Ulster face the point of no return away to Exeter Chiefs, where they have to win to retain any hopes of reaching the quarter-final, and then back that up with a win at home to Bordeaux at lunchtime on Saturday week.

Connacht require a bonus point win at home to Zebre on Saturday and then, depending on the outcome between Wasps and Toulouse, also on Saturday, a bonus point defeat away to the four-time French champions in Sunday week’s finale.

The permutations for Munster are quite straightforward. Beat Glasgow at Scotstoun on Saturday and they will secure their place in the knockout stage for the first time in three years, and 16th time in 22 attempts.

Even a bonus point defeat, provided they denied Glasgow one, would leave them top on the head-to-head meetings, and mean a bonus point win over Racing would seal first place, though that would run the risk of an away quarter-final. Two more wins would guarantee a quarter-final at Thomond Park.

Glasgow must beat Munster and deny them a bonus point, and follow that up with a five-pointer away to Leicester to secure top spot. Leicester are mathematically still there, but need two wins and probably a bonus point or two.

At the very least injury-ravaged Connacht need a five-point haul at home to Zebre to remain in the hunt for qualification. A Wasps win, while denying Toulouse a bonus point, would be their preferable outcome from Coventry later the same day.

Then, a bonus point defeat in Toulouse – when helped by being the last pool to complete its games – on Sunday week would ensure second place and, in all probability, secure a first ever quarter-final.

However, come that finale, at the very least Toulouse will still be in contention, whether they need a win or a five-point haul against Connacht to eclipse Pat Lam’s team in second place.

If Saracens, the reigning champions, win away to Scarlets on Sunday, they will set a new tournament record of 14 consecutive wins, usurping Munster run of 13 victories between 2005 and 2007, and also guarantee first place in this pool and with it a place in the quarter-finals for the sixth season in a row. Were they to follow that up with a win at home to Toulon on Saturday week, Mark McCall’s team would be assured of a home quarter-final.

In fact, one win and two points would ensure that much.

Toulon, their three-in-a-row predecessors as champions, need five points at home to Sale on Sunday and then, almost certainly, another win away to Saracens to have a realistic chance of securing a quarter-final place as one of the best runners-up.

If Leinster beat Montpellier at the RDS on Saturday, they will top this group and thereby become the first team to secure a place in the knockout stage, and for the 13th time in their history. Were they to follow that up with a win away to Castres on Friday week, they would also be assured of a home quarter-final. Failure to do so could see them consigned to an away quarter-final if the other four pool leaders each win their remaining two games, so either way it would probably be no harm if Castres slipped up in Northampton on Saturday.

Both Montpellier and Castres are fighting to stay afloat this weekend, as, realistically, the minimum requirement for each to have a hope of progressing as one of the best runners-up is two wins.

If Clermont Auvergne beat Bordeaux-Bègles at Stade Chaban-Delmas on Sunday, they will be guaranteed a quarter-final spot for the fifth time in the past six seasons. But that will be difficult, as Ian Madigan’s team are the best supported in the Top 14, have a good home record and must win to stay afloat in what will be one of the games of the weekend.

A Clermont win would probably best suit Ulster, who are also in must-win territory against improving Exeter at Sandy Road in the Sunday evening game. Were they to also beat Bordeaux on Saturday week, when disadvantaged by having the lunchtime kick-off, they could progress, although they may also need a bonus point or two before sweating on the remaining results.