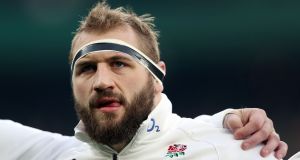 Harlequins and England prop Joe Marler has suffered a fracture to his lower left leg and is expected to be fit again in four to five weeks, the Aviva Premiership club have announced. Photo: David Davies/PA Wire

England have increasing fitness concerns before next month’s Six Nations championship, with almost half their pack set to be worryingly short of match practice before the defending champions’ opening game against France at Twickenham on February 4th after confirmation that the loosehead Joe Marler is the squad’s latest casualty.

It had been hoped Marler would recover swiftly from a lower leg strain but a fracture has now been diagnosed. It means England are set to kick off against France without their two first-choice looseheads following a statement from Harlequins that Marler will be sidelined for four to five weeks. With Chris Robshaw, the Vunipola brothers and Manu Tuilagi already hors de combat it has also emerged that the lock forward George Kruis will not play any club rugby before the France Test, with James Haskell also set to miss Wasps’ weekend fixture against Toulouse in Coventry. Given Dylan Hartley is suspended for Northampton’s final two Champions Cup games, Eddie Jones will have his fingers crossed his squad are not further depleted over the next 10 days.

Saracens had been hoping Kruis would be available to feature in their final pool game against Toulon next week but that prospect now appears remote. Given England are due to spend most of the following week training in Portugal it means the second-row, sidelined with a fractured cheekbone, could be picked against France having not played a single minute of competitive rugby since Christmas Eve. “He’s going to be 100 per cent fit for the Six Nations but he’s unlikely to play for us in the next two weeks,” said Mark McCall, the club’s director of rugby.

On the plus side Kruis demonstrated his ability last autumn to bounce straight back into Test action having missed a large chunk of club rugby in the weeks beforehand. Haskell, though, has played only 35 seconds since June and again looks set to sit out his club’s game this Saturday, having taken a blow to the head shortly after coming on as a replacement in Sunday’s win over Leicester.

It was Haskell’s first appearance in more than six months since he suffered a toe injury playing for England against Australia in the summer and Wasps’ director of rugby, Dai Young, has admitted his flanker is struggling to face Toulouse. “He’s probably doubtful, he’s still with the medics today,” Young said. “I think he’d really have to tick all the boxes so it’s unlikely he’s going to be fit – although he’s not ruled out. We may decide later in the week that it is unwise for us to keep on waiting.”

Mako Vunipola is definitely out of the first half of the championship and may be ruled out of the tournament entirely next week. “Mako will see his surgeon next week,” McCall said. “He is going to be, best case scenario, the end of February.”

The full-back Alex Goode also picked up an ankle problem at the weekend but, as they prepare to face Scarlets at Parc y Scarlets on Sunday Saracens can at least call on Maro Itoje, back after fracturing his hand in the autumn.

With Robshaw out of the immediate equation, there is an obvious opportunity for England to shift Itoje to the blindside flank but Saracens have received no formal request from England to start their young talisman in the back row. “He’ll probably start this weekend in the second row but he played the last 30 minutes of the game against Exeter at blindside for us when Will Skelton came on and he’ll get a couple more run-outs in the back row in the next two weeks,” said McCall, predicting Itoje will be an influential figure whatever number he wears.

“Maro is in very good form. Over the last four weeks, he’s been playing as well as ever. His contributions are enormous, with or without the ball. He makes a big impact, his energy is incredible, he makes things happen, he is really motivated. He’ll definitely play for England, just what position I’m not sure.”

Meanwhile, rugby union’s revised tackle directives are the subject of fresh controversy after a Rugby Football Union disciplinary panel ruled the Saracens prop Richard Barrington was sent off in error against Exeter last weekend. Barrington has been cleared to resume playing with immediate effect, having had his case dismissed after Saracens complained their loosehead had been unfairly treated.

Sarries’ captain, Brad Barritt, has also been banned for three weeks despite initially avoiding any punishment for a dangerous high tackle on Geoff Parling. Barritt pleaded guilty and was banned for six weeks, reduced to three because of his contrition and good previous record. He will now miss Saracens’ final two European pool games against Scarlets and Toulon.

The topsy-turvy verdicts will add further to the sense of unease among players and coaches, with the three-man panel ruling the match referee, Ian Tempest, had dismissed the wrong man. “Following very careful analysis the panel found that Mr Barrington had not committed the act of foul play alleged,” read a statement. “The incident arose out of the specific dynamic of Mr Parling falling unconscious into what would have otherwise been a legitimate contact.”

Saracens will feel vindicated, with McCall having always insisted Barrington was innocent. “If you take the time to actually watch what he did in detail, he’s in a passive and crouched position,” said McCall. “Unfortunately, Geoff’s head came a long way to the side and down. It happened in 0.18 seconds, so Richard couldn’t have adjusted and avoided it. For me it was just an accident.”