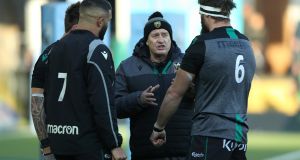 Chris Boyd: the wily Northampton Saints coach has led the club to the top of the Premiership table. Photograph: David Rogers/Getty

It does not matter at what stage of their erratic performance cycle they are in, Franklin's Gardens remains one of the toughest away games in Europe. Northampton are a club steeped in the history of the Champions Cup. They get Europe.

The Saints have a host of overseas players including the Fijian-born Wallaby, Teqele Naiyarvoro, who at 130 kilograms is a behemoth.

Dan Bigger is in great form as their on-field general and his goal-kicking has been match-winning. However, with injuries to both Owen Franks and Courtney Lawes, Northampton have lost two brilliant players that will significantly weaken their pack.

Chris Boyd, their Kiwi coach, is a shrewd and experienced campaigner. He is straight out of the “say little, grumpy headed, hard nosed farmer” coaching school that the New Zealanders seemingly mass produce. He has transferred his success with the Wellington Hurricanes into early season hope for the Saints.

But Europe and Super rugby are two very different beasts. The back-to-back weekends in the Champions Cup are unique. They are the examination rounds. The white-hot glare of playing the same club two weeks in a row exposes every weakness and strength of the individuals and the teams.

There is no place to hide. You get severely tested and you either pass or fail.

Leinster are giants in the Champions Cup. Packed full of talented and experienced players, they know how to win on the road in Europe. They are well rested and in peak physical condition. Leinster are rightly favourites because this version of Northampton remain unproven in the Heineken Cup.

However, there are some myths being propagated about Leinster that need to be debunked. The massively over quoted confidence in chaos theory must be seen for what it is. It simply means playing what is in front of you.

Leinster do not play free-form rugby with no structures. They have a highly patterned attack that forces the opposition into making defensive errors. Then, as every team has done since Billy Ellis picked up the ball in 1823, they simply play. “Confidence in chaos”, “eyes up rugby”, a “Billy Ellis brain snap” – call it what you like, it’s using your rugby instincts to attack space.

Johnny Sexton’s try against Benetton is a prime example. Leinster were executing a complicated set play, involving a “run-around” with Sexton. It all went horribly wrong and he was hit. Being the quality athlete that he is, Sexton broke the tackle and sprinted away with Josh van der Flier running in support. After an interchange of passing Sexton scored an excellent try.

That is hardly revolutionary. Confidence in chaos is a great coaching concept but let’s drop the talk that this is an original idea conceived by Leinster in 2019. That is factually incorrect. Alex Evans, the brilliant former Wallaby assistant coach, was coaching the exact same concepts in 1984.

At Munster Stephen Larkham is attacking the same problem via a different route. He has Munster setting up rucks about 20 metres in field from the sideline and forcing the defence to split and cover a long side and a short side.

On the long side, Larkham has players stand in a set formation. Munster put three forwards at the front and a back behind for an outlet pass creating an arrowhead shape.

On the short side, Munster have players ready to simply draw a defender, then pass and support. If it sounds simple, it’s because it is simple. It is also effective because Munster attack the side where there are less defenders in order to create overlaps. Keith Earls’s try again Racing is proof it works.

The Sydney Roosters, the current rugby league champions in Australia, have used this system for several years. Like all quality attacking plans, its simplicity is its strength. Add in some footwork before contact from the Munster forwards and they have the beginnings of an effective attacking system.

But this intelligent Munster attack may be worthless if their defence does not improve. Racing’s two brilliant tries from short kicks once again exposed the vast space that Munster leave vacant behind their defensive line.

With Conor Murray in the defensive line and only one sweeper, Munster's backfield coverage is predictably sparse. High-quality teams with players like Owen Farrell and Finn Russell, who possess brilliant short kicking games, have torn this system apart in the past and will so again.

In last season’s semi-final, Saracens pinpoint box-kicking was hugely effective because Munster’s back three did not deal with the kicks and the aggressive chase. In close, Saracens forwards crossed the gain line at will, ripping Munster’s front line defence asunder.

There is no doubt of what is coming Munster’s way on Saturday. Big forwards running hard, with a barrage of box kicks and a lethal short kicking game.

Munster must muscle up in their first-up tackles, while adding to their secondary defensive coverage with the back three finding a way to defuse the rain of bombs from Saracens box-kicks.

Given their sanction for breaching the English salary cap, it won’t become apparent until lunchtime on Friday what sort of side the reigning champions will bring to Thomond Park.

Pick a weakened team and Saracens may save Munster’s defensive frailties from being exposed once again. But if they come fully loaded, with the aim of making a massive statement in Europe, Munster have a season-defining battle coming their way.

Imperious Roger Federer thumps Krajinovic to set up Millman show 13:31
Leona Maguire and Stephanie Meadow embark upon historic 2020 season 11:00
Naomi Osaka and Coco Gauff set up repeat showdown in Melbourne 08:41
Arsenal deny Chelsea at the death; Why there’s more to Saracens than money 07:51
Novak Djokovic swats aside Ito to reach Australian Open third round 07:20
Here is your handy guide to sport on television this week