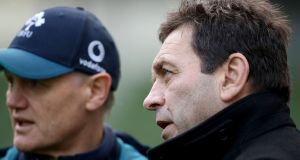 Joe Schmidt and David Nucifora: “We underestimated the intensity of what Japan were able to play at. That genuinely surprised us,” said Nucifora. Photograph: Dan Sheridan/Inpho

The IRFU’s review into the 2019 Rugby World Cup has accepted that there were a number of mistakes made, most notably a failure to develop Ireland’s game, an overt focus on the opening pool match against Scotland while underestimating Japan and a failure to cope with the anxiety that increasingly afflicted staff and players from the Six Nations through to the tournament itself.

These were the main findings revealed at a media briefing yesterday by the IRFU’s performance director David Nucifora, who oversaw the report and also presented it to the Union’s management committee and professional game board yesterday.

Nucifora conducted the interviews of players and staff before and after the World Cup with the help of an independent consultant. This is understood to be Brian McNiece, who had the same role in the 2015 review.

On the vexed question of whether Ireland’s game should have evolved more after the successes of 2018, Nucifora said: “I know there’s been criticism over a period of what we should do, offload or counter-attack more.

“It’s not as if coaching staff don’t consider that, they consider everything,” he added, while stressing that the strength of Ireland’s performances had emanated from the clarity with which they played.

The time frame for developing Ireland’s game was also limited primarily to the eight-ten week build-up given the match focus of the Six Nations, Nucifora maintained. But he nevertheless concluded; “Should we have developed our game further? Potentially yes, with the benefit of hindsight.”

He cited the examples of the All Blacks and England unveiling a more evolved game whereas the ultimate winners, South Africa, stuck to their largely restrictive formula.

“There’s an argument for both sides around style, but should we have armed our players with more tools? I think, with the benefit of hindsight, we should have,” repeated Nucifora, who also said more could be done to improve players’ skill sets from provincial level through to the national team.

Noting that “the bell curve started to drop with performances” during the Six Nations, Nucifora said: “Straight away, there was a level of anxiety. Some of it was stress. It can manifest itself in staff and players. Going into the world’s biggest competition, we probably underestimated the level of support we needed to give staff around that area, helping them manage the expectation that was on them which came from the success they’d had.”

This, he also admitted, was one of the themes from 2015, which had prompted them to have Enda McNulty in situ with the squad for the duration of the World Cup, but clearly more could have been done.

Nucifora also admitted the primary focus in the build-up to the tournament was on the Scottish game, as it was perceived as “our biggest pool game”.

“Everything we worked towards was to have success [in that game]. We achieved that, but we’ve asked the question ‘did we get it wrong in not coupling it up?’ With a six-day turnaround, how would people respond when climbing the mountain and get the same level of focus, enthusiasm to perform against the home side who had nothing to lose?”

“We underestimated the intensity of what Japan were able to play at. That genuinely surprised us. Coupled with coming off Scotland, how we dealt with it, we got a few things wrong. If we had our time again, our focus would have been split more evenly about how we go about it.”

In the course of this review process, who reviewed Nucifora’s performance, or interviewed him?

“No one interviewed me,” he admitted. “Maybe they should have. That’s not a bad idea. I’m sure they will at some point. We’ll sit down and talk about you know how the season went, how the block of time went, but no my role is to look at this and be as objective and clear as I can as to how we went.”

The question seemed relevant as Nucifora himself, unlike any leading IRFU figure heretofore, had upped the ante last May by stressing: “We’ve got to get to a semi-final”. The clear inference was that anything less would not be good enough.

Speaking yesterday, he conceded: “Yea well, we shouldn’t judge the whole period on one game, basically, which is a quarter-final.”

”Everyone knows that there’s far more to what’s being achieved than just a quarter-final loss. But we can’t hide from the fact that that was one of our goals. I don’t think there’s anything wrong with stating that, of saying, ‘that’s what we need to do’. I don’t see why we should shy away from that. Why does that make people nervous?

“It’s actually part of what we’re here for. In performance sport, you go out to win everything. So whether we say or don’t say it, that’s what it’s about. So I think we just have to dust ourselves off, become a bit more robust and get on with it, because the next one’s the same, we’ve got to get there.”

In all of this too, the buck ultimately stops with the head coach.

“I don’t think we’re blaming anyone, this isn’t an issue of blame,” said Nucifora, who stressed that Schmidt was “incredibly honest because even though he’s not going to be here, he’s poured his heart and soul into Irish rugby for 10 years”.