Coach has a history of winning, a word that has been lost to the Australian game 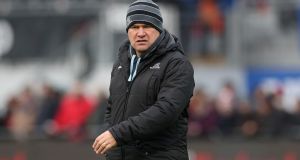 Dave Rennie: will leave Glasgow Warriors to take over as Australia coach on a three-and-a-half year deal. Photograph: Peter Cziborra/Reuters

With Dave Rennie’s appointment as Wallabies coach an important part of his predecessor Michael Cheika’s legacy will live on.

When Cheika took over the reins at the NSW Waratahs in 2013, the Super Rugby rivals he admired the most were the Chiefs, coached by Rennie. It was their uncompromising physicality, particularly in the forwards, that appealed to Cheika, who instilled the trait into the Waratahs and became a key ingredient in them winning their maiden title the following year.

Cheika also attempted to bring a combative physicality to the national set-up and Rennie is expected to build on that platform. And like Cheika, Rennie is an attack-minded coach, but he is sure to go about it in a very different way – a classic Kiwi way with an emphasis on attacking from turnover ball and counter-attack.

Rennie, 55, is the second New Zealander, and the first of Polynesian heritage, to coach the Wallabies following former Crusaders coach Robbie Deans’ tenure from 2008 to 2013. While Rennie did not win as many Super Rugby titles as Deans (five), he nonetheless has an impressive track record.

Rennie also has a history of winning, a word that has been lost to the Australian rugby vocabulary for a generation, the last four years in particular. After guiding the Wellington Lions to a first ITM Cup title in 14 years, Rennie steered the New Zealand Under-20s to three consecutive world titles from 2008 to 2010, a successful coaching pathway that led him to the Chiefs as head coach in 2012.

Rennie achieved immediate success with the Chiefs, guiding the Hamilton-based side to back to back Super Rugby titles in 2012 and 2013. They played in the finals in each of the six seasons Rennie was in charge.

Under his guidance, the Chiefs demonstrated two characteristics which should encourage Australian rugby fans, especially those who have lost faith in the Wallabies.

The Chiefs had a capacity to play a scintillating brand of rugby and score plenty of tries; they thrashed the Sharks 37-6 in the 2012 final, for example. The following year they came from behind to beat the Brumbies 27-22 in the decider, showing genuine character and determination.

Based on that track record, Rennie appears an ideal man for the Wallabies job. But, as always, there is a but. At the Chiefs, Rennie was assisted by former All Blacks coach Wayne Smith, widely regarded as one of the brightest minds in New Zealand rugby. He did not have Smith at his side coaching the Glasgow Warriors and, coincidentally or not, did not achieve the same results.

That is not to say Rennie’s results with the Warriors were not credible. In his second year Rennie guided the Scottish team to the Guinness Pro 14 final and the quarter-final of the European Champions Cup, the first time they have made the playoffs in both competitions.

It was in Scotland that Rennie formed an important connection with former Scotland director of rugby Scott Johnson, who now holds a similar position with Rugby Australia. Johnson had a big say in the appointment of the new Wallabies coach and all indications are that Rennie was his pick.

According to Rugby Australia, the appointment was the result of “an extensive search, which included an in-depth analysis of all the leading candidates in world rugby”. Rugby Australia chief executive Raelene Castle said Rennie was the “standout candidate,” but it would appear he was the only one, or at least the only serious candidate.

Cheika declared he would step down if Australia did not win the World Cup in Japan, but there was a strong speculation about Rennie taking over the Wallabies well before the tournament even began.

Unlike the transparent and exhaustive process underway to find a new All Blacks coach, the appointment of Rennie seems to have been a fait accompli.

Rennie will complete his commitments with the Warriors before joining the Wallabies in July next year on a three-and-a-half year contract, which will take him through to the 2023 World Cup in France.

Despite his accomplishments, Rugby Australia is showing a lot of faith in a coach with no Test experience. As Cheika found out, it is one thing to coach a successful provincial team and quite another to coach an international side.

Perhaps RA have been sufficiently prudent to insert a performance clause in Rennie’s contract so they can terminate it if things do not work out, a trigger no one in Australian rugby would wish to see pulled, if only because it would mean the Wallabies were still not succeeding.