Munster mood will be determined before kick-off

If Northampton win and Glasgow claim five-point haul, province’s cup campaign is over 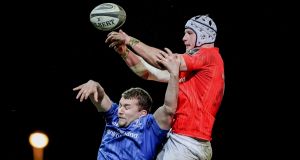 Events today in Lyon and Sale will determine much of the mood music come kick-off in Munster’s European citadel tomorrow. It may merely be postponing the grim inevitability of Munster’s exit, but should Northampton be beaten in Lyon or Glasgow are denied a bonus-point win in Sale today then, theoretically at any rate, Johann van Graan’s side would still be alive.

However, if Northampton win and Glasgow complete a five-point haul at the AJ Bell Stadium this evening, then Munster’s European goose will be cooked and, for just the fourth time in the last 22 seasons they will not advance to the knockout stages.

The mood in Thomond Park, all the more so coming on the heels of last week’s loss in Paris to Racing and with a lunchtime kick-off, will thus be altogether more low key for what would amount to a dead rubber.

Alternatively, were both of today’s results to open the door, then there will still be hope in the air.

No team coached by Pierre Mignoni will roll over and have their bellies tickled, as they’ve shown in both meetings with Leinster. Encouragingly for Munster, in making nine changes from the side beaten 42-14 in the RDS last week, Lyon field nine of the side which started the 13-6 defeat at home by Leinster in round two, with captain Charlie Ngatai, outhalf Jonathan Wisniewski, loose head Xavier Chiocci and ex-Wallabies number eight Liam Gill all returning.

If still in the mix at 1pm tomorrow, Munster would need a bonus-point win while hoping Racing beat Saracens and that Toulouse then beat Gloucester. Admittedly, for all the influence of Stephen Larkham on their attacking game, scoring tries has not been Munster’s forte this season. Only Montpellier (seven) have scored less than Munster’s eight in the Cup this season and, indeed, only five sides have scored less than their 25 tries in 10 games in the Pro14.

That much celebrated fourth try away to the Ospreys in overtime at the Liberty Stadium in round one seems like a very long time ago now, and it remains Munster’s only bonus point in this Euro campaign, to go with just four in the Pro14.

Viewed in that light, Keith Earls being ruled out with what has been described as a minor knee injury looks ill-timed. With 21 tries, Earls is their third highest try-scorer in this competition of all time, behind Simon Zebo and Anthony Foley. Then again, opportunity knocks for the 22-year-old Calvin Nash, who makes his European debut.

Lock Fineen Wycherley, having come through the return-to-play protocols, will make his first European start in the absence of Jean Kleyn, who picked up a neck injury in Paris. Academy products Jack O’Sullivan, a highly regarded 21-year-old backrower, and 20-year-old outhalf Ben Healy are in line to emulate Craig Casey and Shane Daly last week in making their European debuts off their bench. Billy Holland, making his 225th appearance, will become Munster’s fourth most-capped player of all time.

Their set-pieces should provide plenty of ammunition for Conor Murray and JJ Hanrahan to pull the strings and regardless of whether they are still in the hunt come kick-off, it would do Munster the power of good if they could finish off some of their hard carrying, recycling and strike moves with a few tries.

The cash-strapped Ospreys are at their lowest ebb since their formation, with 14 defeats in their 15 games in both competitions this season, and two of their defeats have been by Munster, 28-12 in Musgrave Park last October and 32-13 three weeks later at the Liberty Stadium.

Allowing for Saracens fielding an under-strength side last week and being reduced to 14 men early on, inevitably the return of Alun Wyn Jones prompted an improvement in the Ospreys’ performance. One imagines one look from those eyes would do the trick.

The Welsh captain was one of only three Ospreys’ players named in Wayne Pivac’s first Six Nations squad during the week, but with Jones and George North (at outside centre) retained and Justin Tipuric returning, all three are in this starting line-up. Scott Williams, not named, Nicky Smith, Bradley Davies and Dan Baker also return.

No less than them, Munster’s Irish squad members, Andrew Conway, Chris Farrell, Murray, David Kilcoyne (making his 50th appearance in the competition), captain Peter O’Mahony and CJ Stander will all feel they need big games personally with the opening Six Nations game under a new head coach against Scotland a fortnight away.

Depending on today’s results, Munster may, or may not, feel like they have much to play for collectively come kick-off, but either way they can channel the hurt of last week into a more ruthless performance.