Gerry Thornley: Dominic Ryan has done a service for the sport he loves 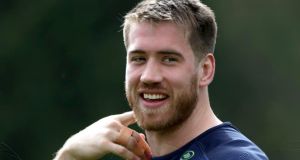 Dominic Ryan: his story underlines that doctors and match officials are right to err on the side of caution in demanding players undergo HIAs. Photograph: Bryan Keane/Inpho

Dominic Ryan’s interview with John O’Sullivan in last Saturday’s edition of this paper was a powerful read, and in the way it was constructed, written and edited, a remarkably coherent read, if not a particularly easy read – which, of course, it could and should never be.

Above all else, in his unflinching honesty and in recalling the graphic, year-long journey from his first concussive episode with Leicester Tigers (if not of his career) to what was ultimately his final game of rugby last January and his eventual retirement at 28 years of age, Ryan has done the sport he loves a huge service.

His story was salutary, deeply poignant and sad, and also scary and harrowing. In graphically describing the symptoms associated with brain trauma in sport, Ryan’s interview should be compulsive viewing for fellow players in rugby union and in other sports as well, not to mention coaches, administrators and those in the medical profession with an interest in combating concussion.

Despite the manifold improvements in the game regarding concussion, mistakes can still be made

We celebrate the warrior spirit of rugby players and other sports people, and this interview again demonstrates how brave players can be, if almost to the point of foolhardiness, and how self-delusional they can be.

Most importantly of all, despite other candid interviews from fellow players before him, dating back to John Fogarty in 2010, the latest revelations from Ryan underline that despite the manifold improvements in the game regarding concussion, mistakes can still be made.

Concussions can still be missed.

Ryan had suffered a couple of concussive episodes with Leinster in February and April of 2017, before joining Leicester and relocating with Matt O’Connor, whereupon his issues worsened from the day he came on as a replacement early in the second half of their Premiership game away to Northampton at Franklin’s Gardens.

Like many others in rugby, Ryan prided himself on his physicality. It was particularly revealing for him to describe the importance of his physicality by likening it to decision-making for Johnny Sexton. So when he lined up George North for what was a try-saving, statement tackle, he admits he scarcely cared, and hence was a little reckless, with his tackle technique and positioning of his head. This also underlines the huge importance of correct tackle technique.

North was denied his try and Ryan was flickeringly knocked out. But when the Leicester physio came on to examine him, Ryan merely said he was “winded”. Subsequently suffering a shoulder injury, Ryan never underwent a Head Injury Assessment (HIA).

He was scared of his career coming to a premature end, and the way he described this, you had total empathy with him

Hence, rather than undergoing any return to play protocols, Ryan played as a replacement the following week, and started a week after that, suffering concussion in a game against Harlequins when accidentally clipped on the side of his head by a team-mate, Tom Youngs, who was latching on to him.

He was stood down on the advice of his neurologist for 12 weeks, and so this led to the harrowing attempts to revive his career despite several alarming warning signs.

The picture accompanying Saturday’s interview from that fateful Northampton-Leicester game shows Ryan flat and face down on the ground and so makes you wonder how he wasn’t required to undergo a HIA, but Ryan did not seek to indulge in any kind of blame game. The player himself admits that at times he was less than fully honest with family, friends, coaches and medical staff alike, and most of all himself.

Ryan had been so energised and excited by the opportunity to relaunch his career at Leicester, describing how the butterflies in his stomach prior to the full debut for the Tigers against Harlequins.

He was scared of his career coming to a premature end, and the way he described this, you had total empathy with him.

Rugby in general, and Dr Martin Rafferty in World Rugby, are striving to improve awareness around, and policing of, concussion. But the more the rest of the game emulates Test rugby in having independent match doctors with access to every camera angle in the ground, and then capable of relaying any relevant information to team doctors or other independent doctors on the ground, the better.

Ryan’s honesty also confirmed, yet again, that players will gain nothing from hiding anything

This season, the Pro14 has introduced additional cameras in each dug-out, with pitch-side medical staff wired up to an independent match doctor. For if nothing else, Ryan’s story also underlines that doctors and match officials are right to err on the side of caution in demanding that a player undergoes a HIA.

In recounting the various symptoms when his concussive trauma resurfaced, be it in matches, training or bouncing on the trampoline with his sister in the back garden of the family home, and the findings of his consultations with his neurologist, Ryan also graphically illustrated how truly terrifying brain trauma in sport can be.

Ryan’s honesty also confirmed, yet again, that players will gain nothing from hiding anything. Maybe some player out there has read Ryan’s interview and will, accordingly, be more honest with himself about any concussive episodes. Hardly mentioned in despatches even a decade ago, there is a growing awareness among players regarding this issue, but there can never be too much.

By the end of the interview, while you were moved by Ryan’s regrets over a stop-start career (particularly in “only” winning one Irish cap) you were just relieved that he had finally come to the realisation that he had to retire from the game he loved. Although he still had so much left to fulfil, he came to the stark realisation that this was what he had to do, as he put it, if he wanted to continue living life to the fullest as an Ordinary Joe.

Most of all, it was a relief to read that Ryan has been migraine free since his last collision with a tackle bag. Stay well Dominic.