Gerry Thornley: All Blacks defeat is bad news for Ireland 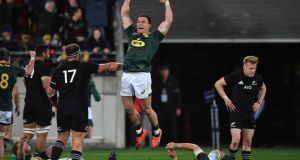 The day that shook the world, a year out from the World Cup. Whatever way you look at it, Saturday’s unlikely double away win in the Rugby Championship by South Africa and Argentina against New Zealand and Australia could have seismic repercussions, not least for Ireland’s prospects of reaching a first-ever World Cup semi-final.

The All Blacks will assuredly learn from what was only a seventh defeat in 89 games under Steve Hansen. The Springboks’ epic 36-34 win constituted a massive step forward for them, as did the Pumas’ first win in Australia since 1983.

It seemed like lunacy for Rassie Erasmus to put his own job credentials on the line given the Boks had lost six on the bounce against the All Blacks, by an average of 23 points, which included last year’s record 57-0 loss in North Harbour. Rassie, what are you doing?

To put Saturday’s events in further perspective, the Boks (24 point underdogs) were 14/1 to win, and Argentina were 3/1, which equates to a double just shy of 66/1. Factor in the All Blacks ominously going into a 12-0 lead after 17 minutes, at that point the double would have been around 250/1. That’s how unlikely were the events that followed.

But the Boks are already making discernible strides under the former Munster head coach, not least in the ambition and width of their running game. It was what brought them back into the match through Aphiwe Dyantyi’s first try, and what ultimately earned them this famous win through the 24-year-old winger’s second try when again side-stepping Beauden Barrett. He is raw defensively, but Dyantyi looks like a true superstar in the making, and Erasmus, as we all suspected he might, is building something.

If Ireland are to progress from a pool also containing Scotland, Japan, Samoa and Russia, they will assuredly face New Zealand or South Africa in the quarter-finals, given they are in the same group as Italy, Namibia and one other. That now looks a significantly more daunting task.

The All Blacks’ defeat had a few uncanny similarities with their second test loss to the Lions in 2017, one which could have distinct repercussions for the next World Cup. That 24-21 win for the tourists was also in the Westpac Stadium, and Beauden Barrett’s home ground again saw his place-kicking radar go askew. Against the Lions, Barrett landed seven out of 10, leaving three penalties/nine points behind, whereas Owen Farrell landed five out of six (leaving just two points behind).

Last Saturday, Barrett’s percentage dropped to 33 per cent, as he landed only two of six conversions, whereas Handrè Pollard missed only one touchline conversion out of his six attempts at goal – the rest unerringly bisecting the posts.

The world’s best player of the year for the last two years has few weaknesses in his game, and Barrett’s brilliant running game and winger’s pace saw him score a record four tries for an out-half in the win over Australia only three weeks previously. But his goal-kicking has always been a somewhat unreliable waft of his right boot, and this has to be an issue for him, Steve Hansen and the All Blacks.

Much of the post-match debate focused on Barrett and co refusing to seemingly even entertain the idea of a drop goal to win the game, either during the nine phases which led up to the game’s final scrum, or the 17 phases which followed it after the siren had sounded.

Apparently, there’s also a view in New Zealand that drop goals are a little beneath the All Blacks, that it’s preferable to win the game through tries

Perhaps Barrett’s confidence in his kicking game had been affected by his goal-kicking, for he never once dropped into the pocket. Damian McKenzie appeared to do so, fleetingly, but maybe that was an aberration. Replacement scrum-half TJ Perenara expressed the view that manufacturing a drop goal can be just as hazardous as putting two passes together for a try, although after he and Barrett had moved the ball on to McKenzie, the latter had the ball knocked from his grasp by Dyantyi.

They did outscore the Boks by six tries to five, but their confidence in their ability to conjure tries and play a high-tempo, high-risk game had also been manifest in the way that they coughed up two converted tries through Jordie Barrett’s wayward quick throw which Willie le Roux pounced upon, and the quick tap by Aaron Smith and intercept pass by Anton Lienert-Brown which Cheslin Kolbe picked off. They play a wonderful brand of rugby but that was kamikaze stuff.

Apparently, there’s also a view in New Zealand that drop goals are a little beneath the All Blacks, that it’s preferable to win the game through tries. One doubts that was the prevailing view in New Zealand when they exited the World Cup to France at the quarter-final stage in 2007. Nor was it so after Joel Stransky’s drop goal sealed the Boks’ 15-12 win after extra time in the 1995 final (a feat Jonny Wilkinson would emulate in the 2003 decider). Nor were there too many complaints by Nelson Mandela and the Rainbow Nation at the time. Nor were there in England eight years later.

Indeed, among the eight drop goals Dan Carter kicked in his test career, in addition to the one which beat Ireland in Christchurch in 2011, none were more valuable than those he landed in the World Cup semi-final and final against Australia and South Africa three years ago.

It transpires that Barrett, remarkably, has never kicked a drop goal in his competitive career, but surely this would be worth adding to his repertoire, if just for endgames such as last Saturday’s? Come a similar scenario in their World Cup opener against the Boks, or indeed any game in the knock-out stages, one sincerely doubts that the All Blacks will be eschewing a drop goal then.

This will surely be one of the lessons the All Blacks will learn from last Saturday’s defeat, along with a good few others.

Hopes of a home winner alive as Barty reaches last four 06:45
Waterford’s Bennett aware of past but looking to a better future 06:30
Owen Doyle: Breakdown of law and order in rugby must stop 06:30
All Island League meetings to hear findings of first assessment 06:30
Hayden Hyde primed for next step in Ireland journey 06:30
Here is your handy guide to sport on television this week