Formidable Toulouse on the crest of a wave as Leinster await 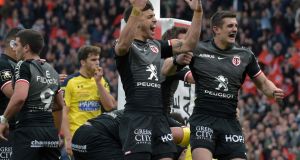 Although Toulouse came to the RDS in January on the back of a 12-game unbeaten run, their co-coach Regis Sonnes maintained that Leinster would be their litmus test.

At face value, they failed it, the scoreline of 29-13 distorted a little by Cheslin Kolbe’s late try, given the home side dominated so much of that encounter.

But everything about their response since suggests that they have grown further and Toulouse arrive at the Aviva Stadium for Sunday’s Heineken Champions Cup semi-final looking an even more fearless side.

After losing to Leinster, they won their next eight matches, four of them away, culminating in that epic quarter-final win over Racing, despite being reduced to 14 men by the relatively harsh sending-off of outhalf Zach Holmes in the 23rd minute, at which point they trailed 10-7.

Soon after, they were defending a five-metre scrum and when most teams would have used turnover ball to kick downfield, instead they ran it from their own line. Brilliantly conceived tries by Maxime Médard and Antoine Dupont earned them a 19-10 lead at half-time, sufficient for their defence to see out a famous 22-21 victory.

Their unbeaten run came to an end when they sent out a second team against Toulon in the latter’s marquee fixture at the Stade Velodrome two weeks ago, with last Sunday’s Top 14 summit meeting against Clermont in a 33,000 sell-out at le Stadium Toulouse and this Sunday’s semi-final in mind.

In a drama filled, rollercoaster of a game they trailed Clermont 44-33 with 12 minutes remaining after conceding a penalty and having Joe Tekori sinbinned for a high, shoulder-to-head hit on Yohan Beheregaray as he was about to touch down in the corner. The 22-year-old Clermont hooker was stretchered off.

Tekori should have been red-carded by Romain Poite and ruled out of this semi-final but after being cited an LNR disciplinary hearing ruled that the 35-year-old Samoan “had made his best efforts to make a regular tackle” and cleared him to play on Sunday.

Richie Arnold might have been red-carded too for a late, high hit on the Clermont outhalf Tim Nanai-Williams which forced him off for an HIA, but in any event, with 14 men, Toulouse turned to their amalgam of heavy rumblers up front and dancing backs for Richie Gray to score.

Helped by a yellow card for Clermont’s Fritz Lee – though nowhere near as bad as the hits by Arnold and Tekori – at 14-a-side Sofiane Guitone danced through for the match-winning try in the 79th minute.

After just two defeats in their last 23 matches, Toulouse’s confidence is sky high.

Stuart Lancaster has been suitably impressed by the form of the Rouge et Noir since that January meeting.

“To be honest, I was impressed with them before then. Obviously, the game we lost over in Toulouse, was a disappointing one for us to lose, but they have an ability to score tries in so many different ways; they can overpower you; they can beat you on the counter-attack; their ability to keep the ball alive and generate successions of tries on momentum.

Lancaster admits that Toulouse’s attacking game makes them difficult to prepare for.

“They are very different from the way any other team would play. Glasgow, to be fair, was good preparation for us, although obviously we didn’t come out on top in that one,” added Lancaster ruefully.

“There were plenty of lessons to talk about in the review from the Glasgow game. They’d be a similar type of team with the likes of Hogg and Seymour, guys who like to score tries off counter-attack, off unstructured rugby. Toulouse are another level above that at the moment as you can see by how many tries they’ve scored this season. So it’s a big week for us in terms of our defence, there’s no doubt.

“But also, it’s not generating opportunities for them to launch their counter-attack by being effective with the ball as well. What we did well in the RDS is we played good, attacking rugby but we retained possession well and built pressure on them. It took us until 60, 70 minutes to break them but we got there in the end. I remember we played really good rugby in the first half and it was three-all until Jack Conan scored just before half-time.”

No less than Leinster, pending tomorrow’s team announcements, Toulouse have a number of selection puzzles. Uppermost amongst these is, essentially, where to play the brilliant, elusive Dupont. The 22-year-old was introduced off the bench to telling effect at outhalf in the opening pool wins over Bath and Leinster, before starting the remaining four pool games and quarter-final at scrumhalf.

But following Holmes’s dismissal, rather than move Romain Ntamack in from inside centre – even though France employed him at outhalf in the Six Nations – they sacrificed flanker Francois Cros, brought on Sébastien Bézy at scrumhalf and shifted Dupont to outhalf. There Dupont followed up his try at scrumhalf with another from outhalf.

The feeling is that the Toulouse coaches will start with Bézy and Dupont, as they did last week against Clermont, not least as Holmes, after returning from suspension, was forced off with concussion.

As he showed in that quarter-final win over Racing, Bézy in some ways offers more of what Toulouse are looking for at scrumhalf. He is not as dangerous around the base as Dupont, but he is quick to the breakdown and passes crisply, has a much better kicking game and is also a clever support player and linkman.

He suffered for being brought into the French team too quickly, and certainly isn’t the first in that regard, when winning seven caps in 2016, but now 27 he is playing the best rugby of his career.

Meanwhile, the debate rages as to Dupont’s best position. Although “le Prodige Français” has largely played at scrumhalf since breaking into the Castres team during the 2014-2015 season and with Toulouse for the last two seasons, akin to two celebrated Toulouse halfbacks before him, Frederic Michalak and Jean-Baptiste Elissalde, Dupont can alternate between ‘9’ and ‘10’ seamlessly.

Electric off the mark with wondrous footwork, be it a kind of goose step or a sidestep off both feet, Dupont carries the ball one-handed, usually his left, and has a strong fend. Indeed, in his elusive solo runs and surprising strength, there’s something almost Maradona-like about him. Similarly, although only 5ft 9in (1.74 metres), at 12st 13lbs (82kg), he packs quite a punch physically, and can both take and make tackles.

Laurent Labit, joint head coach at Racing, asserted a few weeks ago: “For me, Antoine Dupont is the future ‘10’ of the French team.”

As for the player himself, he merely says: “As long as I play, I do not care about the job.”

Picking Dupont at ‘10’ would certainly be a signal of intent, for he is much more of a running, passing and offloading outhalf than a kicking one. He also lacks experience in managing a game from outhalf, and one loose offload last week did lead to one of Damien Penaud’s three tries.

“I do not think I did my best game for sure but it’s just like the whole team, we were caught by an aggressive defence. We are prepared, we will adapt and find the solution collectively,” added Dupont, who said of his partnership with Bézy: “We get along very well, so we will not have any particular difficulty. I know our system as a scrumhalf so it should not be too much trouble. It’s easier to communicate when you know the job of your partner.”

Dupont’s possible selection at ‘10’ would have ripple effects for the midfield and back three, where Toulouse have an abundance of riches.

The likelihood is that Ntamack will start at ‘12’ alongside Sofiane Guitoune, another in-form gamebreaker with quick feet who has scored eight tries in his last seven games. Thomas Ramos, though he gave a mixed display last weekend, will probably start at fullback, not least as he landed eight kicks from eight.

That would leave the Springbok Cheslin Kolbe, who possesses the most lethal acceleration and footwork of them all, on one wing, with Yoann Huget perhaps preferred on the other to Medard and Lucas Tauzin, the French Under-20 World Cup winner who has scored five tries in six starts and was brilliant in the quarter-final win over Racing when called in as a late replacement for Huget.

All four of Toulouse’s titles, and their previous ten semi-finals, were in the gilded Guy Novès era, and when the cameras panned onto him in the crowd last Sunday the entire stadium chanted his name for about 30 seconds.

And this reborn Toulouse have as many attacking riches at their disposal as they did in their Novès heyday.

Toulouse’s results since losing to Leinster in January