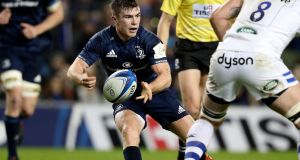 In the two-pronged drive for five, it seems appropriate that the two four-time winners will fight for the right to contest the final in St James’s Park on May 11th and so move to within one game of becoming the most successful side in the 24-year history of the Heineken Champions Cup.

Sunday’s meeting between Leinster and Toulouse at the Aviva Stadium will also leave little room for argument as to the winner’s right to be in the Newcastle final given this is a decider of its own in a three-game series this season.

Toulouse won the first clash at home last October 28-27 before Leinster won the return meeting at the RDS in January 29-13.

“It’s a funny one, we’re well used to playing them twice but not a third one,” admits Leinster’s scrum-half Luke McGrath, who has started all of his province’s European Cup games in the last three seasons bar last season’s semi-final against Scarlets and this season’s final pool game in Wasps.

“The two games were probably a little bit different. The first one we didn’t really have much respect for the ball and they pounced on the opportunities. They’ve got incredible flair. They’re constantly offloading, so it’s hard to defend. I thought our best defensive performance was the one in the RDS, where they only scored one try – so we’re going to need another performance like that.”

“In saying that, Toulouse have improved as well. That quarter-final in Racing was incredibly impressive, the way they handled the red card, bringing [Sébastien] Bézy on [at scrumhalf], moving [Antoine] Dupont to ‘10’,” adds McGrath in reference to Toulouse’s response after seeing starting outhalf Zach Holmes sent off in the 22nd minute of that quarter-final in Paris.

“They’re a class outfit so, it’s going to be a great challenge.”

McGrath will probably come up against the lethal, game changing and versatile Dupont from the start rather than the underrated Bézy and will have his hands full.

“He’s still very young. Even at the weekend moving to ‘10’ he looks very natural there as well. He’s unbelievably strong for a smaller guy. He’ll be challenging us around the ruck, down the short side. It’s the biggest challenge we’ve had defensively so far, I’d say.”

In an injury-delayed start to the season, Dupont was introduced off the bench to telling effect in the initial pool wins over Bath away and Leinster at home, when his running game turned the match on its head.

Since then he’s started their last five European games at scrumhalf. He’s made nine offloads and 11 clean breaks, beaten 26 defenders and scored five tries, including one at scrumhalf and another at outhalf in the win over Racing in again seamlessly shifting positions.

In this Dupont is but the latest petit général in a long list of diminutive French half-backs who can switch between the two, one of the most proficient being another Toulouse man, Jean-Baptiste Elissalde.

“I don’t know if it’s more of a natural ability or have most of them started playing ‘10’ when they were younger,” says McGrath. “I used to play ‘10’ in school, but I don’t know if I’d feel comfortable going into ‘10’ now. They’re just all so skilful on the ball, especially in Toulouse, that they have that flair like I said. No, it is impressive.”

This may also partly be because French rugby is less structured, and so whereas McGrath would have to learn a new playbook if he was making the switch, Dupont would be encouraged to play what he sees in the Toulouse ‘system’.

“Yeah, that’s a good point. Yes, possibly. You could see they don’t even go into rucks, you have guys like [Joe] Tekori and [Charlie] Faumuina offloading the ball as much as possible. That’s why it’s such a challenge to get set defensively, and that’s where we’re going to be challenged at the weekend.”

Leinster’s form has been better than some have given them credit for this season, most notably in the pool wins at home to Wasps, Bath and Toulouse, as well as Wasps away, and no less than Toulouse against Racing, the way the champions had to dig so deep against an inspired Ulster who threw the kitchen sink at them, their quarter-final should stand to them.

“It was a hugely challenging game against Ulster,” says McGrath. “I thought Ulster were brilliant. They put us under a lot of pressure and I’d like to think we learned a lot from that game and we can implement a better game plan this weekend.

“We definitely have a big performance but our cohesion hasn’t been great over the last couple of weeks. You can say that’s from changing the teams but that’s why the training week this week is going to be huge, just to get cohesion up to scratch and we need to put in our biggest performance of the year if we want to win.”