Joe Schmidt outlines how he will cut down World Cup squad 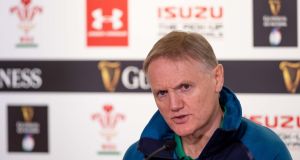 Joe Schmidt has revealed a “timeline set by World Rugby” for Ireland’s World Cup squad to be whittled down from 45 to 31 players before September 7th.

That’s the date of the last warm-up match against Wales at the Aviva stadium. The Pool A opener against Scotland is on September 22nd in Yokohama.

Schmidt will release a 45-strong panel before the first pre-tournament game against Italy on August 10th. This can be trimmed to 38 before facing England at Twickenham on August 24th with the final squad revealed in the days between the Wales double header in Cardiff and Dublin.

“On insight into World Cup preparations,” read a Leinster statement about Schmidt’s talk to the province’s supporters club last Saturday.

“Joe revealed that Ireland’s logistics team are already in Japan, laying the groundwork and planning for every eventuality.

“He also explained squad selection works to a timeline set by World Rugby. 45 players will be selected at the start of the warm up games. That then reduces to 38 players during the warm up series before finally settling on 31 players before the last warm-up game against Wales.”