Leinster back in control of their own destiny

Gerry Thornley at the RDS Arena 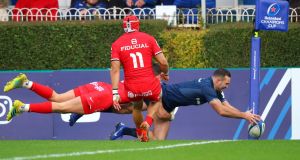 The two four-time winners had both seen this as something of a litmus test and, unsurprisingly, the champions confirmed the shift in the balance of power back from Toulouse to Leinster.

The champions may have been missing eight Irish internationals, including their talisman and captain Johnny Sexton, but as with Munster the night before this was a statement win.

You don’t win doubles with a team, but with a squad, and this was yet another demonstration of their unrivalled strength in depth.

It lifts them three clear of Toulouse and virtually secures qualification for the last eight, but the main prize of a home quarter-final will be ensured by beating Wasps next Sunday at the Ricoh Arena, by which stage Leinster will know exactly what is required of them.

The one blot on their landscape was the leg injury which left Luke McGrath stretched out and requiring attention before being carried off, an additionally worrisome sight for Joe Schmidt given Kieran Marmion’s current absence.

Leinster’s unremitting willingness to make yards and effect clean outs was epitomised by their captain Rhys Ruddock, who led from the front with an early charge and, well, never stopped charging. In all he made 20 carries for 42 metres.

Needless to say, James Ryan and Jack Conan followed suit with 16 carries apiece, with Scott Fardy, Tadhg Furlong and Cian Healy also chipping in and they all put in big shifts in defence.

It was also a measure of Leinster’s defensive work that they restricted Toulouse to so few line breaks and offloads until the last throes of the game.

Despite the early kick-off, on a cold, breezy but dry day in Ballsbridge the atmosphere tingled and both teams laid down their intentions from the off.

Ross Byrne carried hard and Ringrose made a half-break and freed his hands for Ruddock to gallop upfield. Toulouse countered with a rapid fire tap penalty in their own half by Antoine Dupont, who knows only one speed to play the game, but Josh van der Flier stymied this attack with a superb turnover.

Better followed from Sean Cronin, rushing up from the tail of a line-out to make a rib-tickler on Thomas Ramos, stamped ‘welcome to Dublin’, when the outhalf had to gather a high pass from Dupont.

Romain Ntamack came in off his feet to concede the penalty, Leinster attacked off a lineout through the phases and Ross Byrne, making his third carry in six minutes, was caught with a seat-belt tackle by Richie Arnold. The outhalf tapped over the penalty.

Soon though, after a rare loose pass by Ringrose, the Leinster scrum twisted and buckled on the loosehead side under pressure from Charlie Faumuina for Ramos to level matters.

Ignited by Larmour standing up and stepping Jerome Kaino for dead, Leinster hammered at the Toulouse defence through an utterly unrelenting 38 phases. But this revived Toulouse team aren’t just about attack, and they were up to the task until Ryan was left isolated after carrying from Ruddock’s tip on pass, and Julien Marchand couldn’t be shifted from the jackal to earn a relieving penalty.

They could have been further in credit after Sofiane Guitoune broke Ross Byrne’s tackle off a lineout, but his switch pass was fumbled by Yoann Huget. Kolbe threatened too when coming off his wing to devastating effect, and it required a sharp covering tackle by van der Flier.

Larmour countered brilliantly, linking with Dave Kearney’s clever line and tipping on the return pass to release Luke McGrath. Francois Cros was offside and after a fine piece of mopping up by Ross Byrne, Kaino tackled Ringrose around the neck.

This gave Leinster the platform to pound through the phases again. Kolbe did enough to prevent McGrath scoring off a big scrum with a penalty advantage. When Faumuina was replaced for an HIA, Leinster opted for another scrum.

It buckled, but Luke Pearce ordered Leinster to play it, Ringrose floating a long pass to Adam Byrne, who stepped Maxime Medard before being tackled by Huget. But two phases later Conan came hard on to McGrath’s pass to finally plunder the try.

The crowd heaved a collective sigh of relief as much as roared. That was hard yakka. Ross Byrne converted but the crowd then held their breath as Toulouse worked Kolbe into space before Ringrose shepherded him across the pitch and into a switch with Medard, and then rushed up on Ramos. But Pearce pinged O’Loughlin for going off his feet and Ramos made it 10-6 at the break.

Six minutes into the second half, Adam Byrne countered for Cronin to make good yards a few phases later, and when Marchand pushed off the line too early finally the officials gave the first hindmost decision of the day - having previously ignored it. Many of the crowd gave the decision not only ironic cheers, but an ironic standing ovation.

For once Leinster’s ball retention let them down, Ramos kicked away turnover ball to round off an undistinguished game, he was given the shepherd’s hook to be replaced by the Aussie Zack Holmes.

Heretofore, Ross Byrne’s cross kick was kept under wraps. But as another punishing drive gathered momentum - Ruddock, Scott Fardy and Conan making amongst those making hard yards - Byrne unveiled it to devastating effect. No outhalf does it better, and he’s rarely had a better one that hung a yard or two inside the left touchline for Kearney to gather and brilliantly touch down despite being tackled in the air by Ntamack.

Leinster then gave themselves the final quarter to score a bonus point after the forwards plundered through close-in phases, with Mcgrath receiving treatment, Cronin dotting down on the try line and on the hour at the back of the ruck.

Leinster replenished their front row, though by this stage Toulouse had emptied all but one of their 6-2 bench, leaving them with two scrum-alves and an outhalf at their 9-10-12 axis.

Toulouse did give Leinster a taste of their own medicine by pummelling through multiple phases close to their own line, but given their reputation and new-found flair, their lack of variety cost them. Leinster kept pushing off the line and tackling low, and eventually James Tracy worked himself over the ball to earn a relieving penalty.

Cue the day’s first hearty rendition of Cockles and Mussels, always a better barometer than the Allez les Bleus chants. It had used up the clock though, and after Noel Reid replaced Ross Byrne, Larmour’s knock on undid their next attack, the 75 minute mark passed.

Whereupon the less than outstanding Medard was penalised for holding on and alertly and intelligently Leinster opted for something different. In a flash Jamison Gibson-Park tapped, raced into the 22 and floated a left-to-right double skip pass to the under-used Adam Byrne, who had ample space to demonstrate his finishing ability.

As the clock passed the 80 minute mark, Kolbe finally displayed his finishing ability with a consolation try, which he also converted. But it has no material effect on Leinster’s day or enhanced prospects of qualification and a home quarter-final.