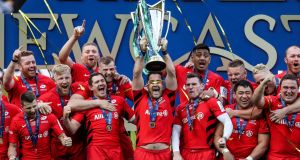 How they qualified: Pro 14 champions.

Key man: Sexton is the easy answer but his 34-year-old body cannot guarantee he will play enough rugby so it has to be James Ryan.

Prospects: Well oiled but nothing short of a second title in three seasons will suffice now that Saracens are threatening to take their eye off the European ball. Champions elect.

How they qualified: Finished third in Conference B of the Pro 14.

Prospects: They should be competitive enough to win a Champions Cup game for the first time since January 2015. Maybe they can catch Northampton or Lyon at home.

How they qualified: Via an excellent third place finish in the Top 14.

Key man: Demba Bamba arrives from Brive with an eye on becoming the games most ferocious scrummager.

Prospects: Roll the dice. Worst team for Leinster to face away in the early rounds because they are expected to be distracted by domestic affairs come December and January.

How they qualified: Finished fourth in Premiership.

Key man: Taqele Naiyaravoro, the Wallaby winger born in Fiji, can destroy any team if allowed space to build up a head of steam. Special mention for Owen Franks.

Prospects: With Dan Biggar pulling the strings they should escape the pool. December back-to-backs with Leinster will tell all.

How they qualified: Topped the Premiership but lost final to Saracens.

Key man: Henry Slade oozes class in midfield but it has to be new signing at fullback Stuart “Scotland can win the World Cup” Hogg. Add Jack Nowell to this potion and the Chiefs should be electric with ball in hand.

How they qualified: Top of Conference A in Pro 14.

Key man: Adam Hastings has been hinting at becoming a world class 10 for a season or two. Here’s his chance to step up.

Prospects: Hard to trust Glasgow even with a coach of Rennie’s calibre, who they seem destined to lose next summer.

How they qualified: Fifth in the Top 14.

Key man: Fijian winger Josua Tuisova tore up Wales at the World Cup. More of the same if Kiwi outhalf Ihaia West can find him.

Prospects: Relegation tends to be unforgivable in France so with four wins from nine Top 14 games so far, O’Gara will be forgiven for treating his favourite playground as an afterthought.

How they qualified: Sneaked in after finishing seventh in Premiership.

Prospects: With the Curry brothers in the backrow, Sale should make the last eight.

Last season: Almost put Leinster out in a quarter-final thriller.

How they qualified: Second in Conference B of the Pro 14.

Key man: Marcell Coetzee is Ulster’s best player but John Cooney is the most important as the scrumhalf will be kicking the goals and running the attack.

Prospects: Heavily reliant on the fitness of Cooney and Coetzee. Keep them fit, beat Harlequins twice in December and they can make the quarters but it will be tough.

Last season: Couldn’t get out of a pool containing Leinster and Toulouse.

How they qualified: Sixth in the Premiership.

Prospects: Time to return the millions Bruce Craig has pumped into the club with some progress in Europe. Quarter-finalists.

How they qualified: Fifth in Premiership.

Key man: Maybe Kyle Sinclair, but nobody stands out as this middling squad needs to focus on avoiding relegation.

How they qualified: Top 14 runners-up.

Key man: Alivereti Raka is a joy to behold but Morgan Parra - still only 30 - remains the heartbeat of this club.

Prospects: It has to happen some year. Clermont have the power and pace to make it to the very end, but it’s sealing the deal that has historically been the problem.

How they qualified: Second in Conference A of the Pro 14.

Prospects: Racing and Saracens are both capable of winning this tournament so they will need to dig deep into the well of passion that is buried beneath Thomond Park. It could be all over before Carbery returns from the ankle injury. They need him in December.

How they qualified: Premiership champions.

Key man: Billy Vunipola followed by Owen Farrell and Maro Itoje but how much will we see of the superstars after the salary cap breach saw the club docked 35 league points and fined £5 million?

Prospects: Do you believe McCall when he says the focus will remain on avoiding relegation from the Premiership or was it a clever narrative shift to elicit sympathy? Either way, Saracens can avoid the drop and regain their European title. That they are paying for players in a manner that brings into question the entire state of English rugby should matter, but it probably won’t.

How they qualified: Finished fourth in Top 14.

Key man: Simon Zebo. Only joking, but while Zebo is important to the Parisians there is no individual that this big, powerful squad cannot live without.

Prospects: Contenders. Now the World Cup is over and men like Virimi Vakatawa and Leone Nakarawa are back in the fold, Racing will sort out their domestic form while striving to win this tournament.

How they qualified: Fourth in Conference A of Pro 14.

Key man: Gareth Anscombe is injured so George North’s return from Northampton showed genuine intent to turn around Welsh fortunes in Europe. Pity about the draw.

Prospects: Alun Wyn Jones at lock and a plethora of men who followed him to the World Cup semi-final should give them a chance. But it won’t. They are different players outside the red jersey.

How they qualified: Third in Conference A of the Pro 14.

Key man: Jack Carty but the indications that other influential figures, Bundee Aki and Kieran Marmion, could be heading to pastures new does not bode well.

Prospects: They can ruin one or two teams chances of reaching the last eight - starting with a weakened Montpellier - but anything more would be an enormous achievement by Friend.

How they qualified: Finished sixth in Top 14.

Key man: Handré Pollard’s nerves of steel for the Springboks in Japan makes him the most valuable player in the game but he fractured his cheekbone in the World Cup final so Frans Steyn will have to suffice.

Prospects: First day out is a windy Sunday in Galway - without Pollard - so that result will dictate their mood thereafter. Clear priority is domestic success.

How they qualified: French champions.

Key man: Antoine Dupont can become the best scrumhalf on the planet, even better than De Klerk and Aaron Smith, but Romain Ntamack also needs to continue to grow.

Prospects: One of five teams that can win this tournament.

How they qualified: Finished third in Premiership.

Prospects: Not a bad team but lack the quality across the board to make the knockout stages.

Chiefs survive loss of Mahomes as Brady wins battle of the veterans 12:04
Bríd Stack released from hospital with no spinal damage 11:46
The Offload: Ronan O’Gara more than willing to take a punt on Jack Crowley 10:00
Spirited finish allows Kevin Na to win Sony Open 09:09
All in the Game: Glowing tributes few and far between as Özil’s Arsenal exit nears 09:00
Crossword Get access to over 6,000 interactive crosswords