Siya Kolisi: ‘We can achieve anything if we work together’

The Springboks have overpowered England and won the Rugby World Cup for a third time, thereby joining the All Blacks as the most prolific World Cup winners of all time. Video: Reuters 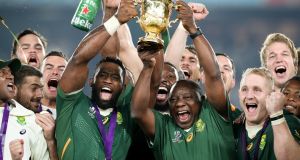 Sometimes, just once in a while, a game really can transcend sport. Nothing may ever compare to the profoundly meaningful sight of Nelson Mandela handing over the trophy to Francois Pienaar for the first of the Springboks’ World Cup triumphs in 1995, but the third in Tokyo on Saturday came pretty close.

Celebrating in the stands, Pienaar couldn’t have been celebrating more happily.

Receiving the William Webb Ellis trophy this time was Siya Kolisi, the Springboks’ first black captain, who rose from a particularly poor township in Port Elizabeth and made the most of his breaks along the way.

He has two children from an inter-racial marriage, as well as adopting his half-brother and sister. If ever a sporting figure could help to unite his troubled country it is Kolisi and even before he raised the trophy, his on-pitch post-match interview was powerful.

“We have so many problems in our country, but to have a team like this… You know, we come from different backgrounds, different races, and we came together with one goal, and we wanted to achieve it. I really hope that we have done that for South Africa, to show that we can pull together if we want and achieve something.”

Kolisi also thanked the support which the squad received from all of South Africa.

“Since I have been alive, I have never seen South Africa like this. Obviously in 1995, what the World Cup did for us, and now with all the challenges we have, the coach just came and told us we are not playing for ourselves anymore, we are playing for our people back home.

At the post-match press conference, Rassie Erasmus revealed how the opening defeat by the All Blacks taught him and his squad how to cope with the pressure to perform for their country, by coming to the realisation that rugby should create hope rather than pressure.

“It was my first World Cup as a coach, certainly expectations were (high). I think the first All Blacks game was a great test run in terms of us handling pressure.

“We were terrible that week, we were tense in talking about things and it was a terrible build up and that taught us how to handle the quarter-final and semi, final and so on.

“We started talking about rugby being a privilege, not a burden.

“Hope is not talking about hope. It’s not saying you’ve got hope, tweeting a beautiful tweet. Things like that. Hope is when you play well and people watch the game on a Saturday and have a nice braai (barbecue) going.

“They have a nice barbecue, watch the game and feel good afterwards no matter of political or religious difference. For those 80 minutes, you agree when you usually disagree.

“We started believing in that and saying that is not our responsibility that is our privilege to try and fix those things.

“The moment you see it that way it becomes a hell of a privilege and that was the way we tackled the whole World Cup campaign.”

Erasmus also spoke about Kolisi the man as well as the rugby player.

“We had a good chat yesterday when we did the jersey presentation for the 50th Test match. It is easy to talk about going through hard times and struggling to get opportunities but it is tough when there are days when you didn’t have food or couldn’t go to school or didn’t have shoes to wear.

“When you sit down and think about it, there was a stage when Siya didn’t have food to eat and, yes, that is the captain and he led South Africa to hold this Cup and that is what Siya is.”

In return, Kolisi spoke about the staggering turnaround wrought by Erasmus.

“I honestly can’t explain how I was feeling, seeing the joy in my team-mates’ faces was the best thing for me as I know how hard they have worked and the coaches have worked.

“I think the coach said it earlier, how proud we are as South Africans, because we know how many people didn’t give us a chance, but we had to believe in each other as a team and the people around us and the plan and he kept on telling us how good we are, and he drove us to work hard and he drove us to places we have never been before.

“It’s special for all of us. I have never seen such support in South Africa from people back home. I honestly don’t know if we could have done it without them, and everywhere we saw the videos, sending us videos of people coming together. It was really beautiful for us to see. It was awesome and I am really grateful that I can share this moment with people. It means a lot. It’s an absolutely amazing day for all of us.”

Recalling the first meeting between the players and Erasmus, Kolisi said, “I think the first meeting we had was in Johannesburg and it was just straightforward and he told us exactly what we were doing as players. A lot of us getting quite a lot of money and doing all the things off the field full steam, trying to inspire people, but we didn’t make rugby the main thing.

“He told us straight that it has to change. The shift has to come. Rugby is more important and the Springboks are more important than our personal goals. Because there are so many people who spent their last salary to come and watch us play, and they want to see us give our best on and off the field, and that was the change of mindset. We started working hard and we stopped doing so much social media just to make sure that we put heart and soul on and off the field. I think the most important thing that he brought in was honesty. He was always honest with all of us. And he told no one else, just us as a team. It was really amazing because you always knew where you stood, and we knew where the other stood. So it was really special and we are really grateful that it did work this way because it was tough at the beginning.

“Yeah, and we have so many rugby players in South Africa that we can move from Union to Union but now all we wanted to do was work hard and do everything you can , and that’s what we did.”