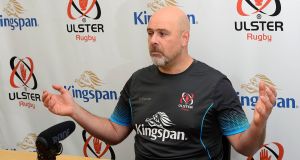 Ulster Rugby’s head coach Dan McFarland at Kingspan Stadium in Belfast. ‘Champions Cup rugby is a great opportunity to put on a wider stage what we are all about.’ Photograph: Arthur Allison/Pacemaker

Ulster look to be fully loaded for their Heineken Champions Cup opener at Bath on Saturday, with Iain Henderson, Billy Burns and Marcell Coetzee all expected to be in the starting side.

Unlike the northern province’s other frontline World Cup returnees, Jacob Stockdale and Jordi Murphy, club skipper Henderson was not involved in last weekend’s 22-16 defeat at Munster but is now expected to play his first game for the province this season when they go to the Rec.

Outhalf Burns, who looks set to be playing against older brother Freddie, has missed Ulster’s last two games, but the 25-year-old appears to be ready to wear the number 10 shirt again as Dan McFarland’s side bid to achieve a rare opening European success away from home.

Coetzee was stood down for the trip to Thomond Park and his physicality in both ball-carrying and breakdown work will be key to Ulster’s cause at Bath.

Also back in the mix for selection are Will Addison and Louis Ludik after both had to leave the field early in Ulster’s 22-7 victory over Zebre at the start of the month, Addison with a shoulder issue and Ludik due to an HIA.

With Stuart McCloskey and Marty Moore coming through last weekend unscathed after their returns to action (for Moore it was his first game of the campaign because of injury), McFarland appears to be in position to play his strongest hand at a ground Ulster have triumphed at on the previous two occasions they have played Bath in Europe.

We want to get back into the competition and give it a crack. It’s a massive challenge

With the home side’s England World Cup players including Sam Underhill, Anthony Watson and Jonathan Joseph likely to be back (it is unclear if World Cup winner Francois Louw will be available), McFarland knows that his squad faces a huge test of their ambitions in the competition from the off.

Last season, Ulster unexpectedly made it to the last eight for the first time in five years, and were only narrowly beaten by Leinster at the Aviva Stadium, and McFarland is intending on tasting knockout rugby again.

“Champions Cup rugby is a great opportunity to put on a wider stage what we are all about,” said McFarland.

“What a great experience that [last season] was,” added the Ulster head coach of the previous campaign, when the pool stages saw the province win on the road twice – at Scarlets and Leicester Tigers.

“We want to get back into the competition and give it a crack. It’s a massive challenge and we just have to focus on how strong we’re going to be.

“If we play at our best it’ll give us a chance in the group, and if we don’t it won’t, as simple as that.”

Their other opponents in Pool Three are Clermont Auvergne and Harlequins, with the Premiership side being Ulster’s back-to-back opponents next month.

Though the Premiership has only had four rounds of action, and Bath only won their second game last weekend, McFarland is certain that the West Country side will be ready to make an impression in Europe.

“They have big forwards and electric backs,” he said. “They’ve got some superstar players and obviously their back three are one of the strongest back threes around in terms of running talent, and that’s a real threat.

“Actually, they’ve got threats all over the field, and they also demolished the Northampton scrum last weekend. That, in itself, is a huge threat for us but a really good challenge.”

Ulster’s scrum, with former Leinster props Jack McGrath and Marty Moore playing together for the first time at Munster last Saturday, looked strong and will have be the same at the Rec if the visitors are to make it three European wins there from three.

Meanwhile, Ulster winger Rob Lyttle has signed a three-year contract extension to keep the 22-year-old at the Kingspan Stadium until at least 2023.