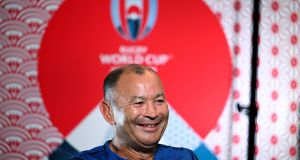 Eddie Jones has resisted the temptation to restore the fit-again Mako Vunipola and Jack Nowell into his starting XV to face Argentina on Saturday but both are set to make their comebacks from the bench.

Henry Slade is also among the replacements with Jones reverting to the XV which beat Tonga in England’s opener, with the exception of George Kruis coming in for Courtney Lawes, and making nine changes to the side which beat the USA.

Argentina represent England’s first major challenge of the World Cup and as a result this can be considered as Jones showing his strongest hand. During the Six Nations his preferred midfield trio was Owen Farrell at outhalf with Manu Tuilagi and Slade outside him. Slade’s knee injury has been untimely but Jones has now settled on George Ford, Farrell, who resumes the captaincy, and Tuilagi as his preferred midfield. This is the third time they start together as a trio, having done so to impressive effect against Ireland in the warm-up series and Tonga previously.

Up front, Joe Marler starts at loosehead with Mako Vunipola set to make his second comeback from the hamstring injury he suffered in May’s Champions Cup final from the replacements bench. His first was against Ireland in August but he lasted just a few minutes before hobbling off again. Nowell meanwhile, has not played at all since suffering a knee injury in the Premiership final but before England flew to Japan, Jones had this match in mind for both he and Vunipola to make their comebacks and like Slade both are set for their first taste of action in Japan.

Lawes can consider himself unfortunate to miss out the XV but falls victim to the depth England have at lock and the form with which Maro Itoje and Kruis are playing, not to mention their Saracens connection with the hooker Jamie George. Completing the tight five is Kyle Sinckler while again the backrow consists of Tom Curry, Sam Underhill and Billy Vunipola. Lewis Ludlam is rewarded for a fine showing against the USA with a place on the bench, meaning there is no Mark Wilson in the matchday 23. Like Slade, Wilson established himself as a key figure during the Six Nations but he too has been hampered by an untimely knee injury.

In the backs Ben Youngs wins his 92nd cap at scrumhalf to become England’s third most capped player and he will be joined by Dan Cole as and when his Leicester team-mate comes off the bench. Jonny May and Anthony Watson take their place on the wings while Elliot Daly continues at fullback as one of five players along with Marler, Curry, Billy Vunipola and Ford to start all three of England’s matches.

Luke Cowan-Dickie is providing cover at hooker on the bench, Willi Heinz at scrumhalf, but with Slade and Nowell both returning to the 23, there is no place for Jonathan Joseph despite impressive showings in both matches so far. Jones said: “We are in Tokyo for the first time and the players are excited to be here and have had a good week’s preparation so far. We know Argentina are a very good team and our players will be ready for the game.

“Argentina is a completely different team from others we have played so far in the pool stages and are always about the physical contest. This week it’s about getting our game right, our set piece in a good place and making sure defensively we are organised and ready to find ways to score points against them.”