Having burnt Ireland, the sun has never shone so brightly on Japanese rugby 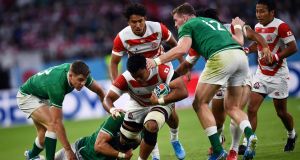 On a sunny Wednesday morning in Ginza, the Japanese players found themselves entertaining a question that contained a mocking echo of more carefree and heady days for Irish rugby. Who would you rather play: South Africa or New Zealand?

Koo Ji-won, the Korean prop who has been shaped and fashioned for the Brave Blossoms’ frontrow since high school, screwed his happy-go-lucky expression into a frown.

“Don’t know yet,” he said bluntly. The profile of his team has gone stratospheric over the last few days. Before Japan played Ireland, five days and a lifetime ago, their media briefing took place in the forgotten upstairs of a cavernous hall in Hamamatsu. Now, at 10 in the morning, a long line of Japanese media waited to gain entrance to a big conference at the base of the kind of shiny, glass-fronted skyscraper in which Jock Ewing used to cut oil deals.

Gone were the carefree predictions and mildly provocative promises of a week ago. Now, when Japan face Samoa on Saturday evening, they are guaranteed a new and expectant audience. News of the Brave Blossoms’ nerveless coup against Ireland travelled across the Sea of Japan to Korea and the victory has seen Koo Ji-won’s profile skyrocket at home.

“Guys that I don’t even know said that they watched the game. Everyone is excited in Korea even though rugby is not so big. Everyone is behind me and supporting. I’m really happy to hear that Korean rugby players are supporting me and that the newspapers are supporting our win. It’s great to have that support. I’m simply happy but I do feel anxious as well. We’ve done so well and I don’t want to let them down.”

Ji-won is emblematic of the concentrated policy of diversification which, in flat contradiction to the nation’s history, has helped Japan to find its voice on international rugby fields. He attended high school in Oita and went on to Takushiko university, progressing as a rugby player and winning his first cap two years ago. Against Ireland, he was conspicuous for his energy and his unusually demonstrative show of passion after Japan won a penalty against the Irish scrum.

“I just got really emotional after pushing them,” he shrugged before claiming that the heat hadn’t bothered him the slightest. “I weighed myself after the game. And I put on weight! I felt muscle soreness after the game.”

But over the course of the hour, as defence coach Scott Hansen led a parade of interviews, Japan were in no mood to glory in last Saturday’s win. The constant comparisons with their hallucinatory World Cup victory against South Africa in Brighton four years ago holds the sharp reminder that they still failed to emerge from their group that time. Now, there is an unspoken obligation to reach the last eight.

“There is nothing much to talk about,” he said, but allowed that a profusion of messages and congratulations had been dispatched to the Japan camp in the hours and days afterwards. “There have been a lot of messages but I haven’t really read them in depth. We haven’t achieved anything yet. That Ireland win is just one part of our success. It was a very meaningful victory but we are just working towards Samoa so we can achieve our ultimate target.”

Inagaki is another symbol of Japan’s ambitions to steadfastly promote the game throughout the interior. He grew up in Nigata, a rainy and often snowy port town on the west side of Honshu, the main island, where he stood out as an exception in that he was promising rugby player. That he chose to embroider the locality into his boots didn’t go unnoticed.

“Nigata looked after me really well. A lot of associations and companies in Nigata have been supporting me since my high school days. It was just a way to pay things back. And they have done so much for me. I wanted to show that I am playing for Nigata.”

It isn’t mere symbolism either: Inagaki recently donated three million yen (about €25,000) to his former high school so they could lay out a rugby field for the school team. His presence on the team has become the chief attraction for a “town” of almost three-quarters-of-a-million people. But he has no idea what the local response has been to his gesture.

It’s the abiding message from the Japanese now. Uniformly and through translation, their players managed to slip behind the shield of group-speak that has dominated media events at this tournament, with much talk about focus and consistency. Exhilarating as Japan have been on the field, they’ve clearly made it a policy not to utter anything through a microphone that will leave them hostage to fortune. It doesn’t matter: the national fascination with them has never been higher, not least because they are such an exotic concoction of international influences in Japan.

They’ve found whatever common grounds necessary to bring them closer together. Pieter “Lappies” Labuschagne became the third foreigner to captain Japan when he led them out against Ireland in Shizuoka. His leadership skills had impressed and that he could communicate in English with referee Angus Gardner didn’t hurt either. One of his ideas was to have the squad watch The Pursuit of Happyness, the Will Smith tear-jerker comedy about dauntless persistence.

“The reason why . . . I watched the movie a long time ago but also at the end of the year. And the message just stuck with me. I thought it was really important to show it to everyone seeing that we were up against a big battle over the weekend,” he said.

Whether it was the film or the punishing weather or Ireland miserably underperforming or whether it was just the simple unveiling of a Japanese team that everyone had under-estimated: it worked. The sun has never shone so brightly on Japanese rugby as this week.