Cork Constitution hang on for fifth Bateman Cup in a row 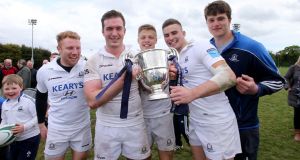 Cork Constitution survived a frantic finish to edge out hosts Old Belvedere at Anglesea Road and win their fifth Ulster Bank Bateman Cup in a row.

Brian Hickey’s men did all their scoring in the first half, with tries from Liam O’Connell and man of the match Brian Hayes establishing an 18-10 interval lead, and had just enough in reserve to hold off a determined comeback from Belvedere who were relegated from Division 1A three weeks ago.

It was the first leg of a potential All-Ireland double for Constitution who return to the capital next Sunday for a mouth-watering Ulster Bank League decider against reigning champions Clontarf, while they are now the Bateman Cup’s most decorated club, surpassing Lansdowne’s quartet of titles between 1922 and 1931.

John Poland, a week on from his British & Irish Cup success with Munster ‘A’, was distributing swiftly and accurately from ruck to ruck

Quinlan’s halfback partner John Poland, a week on from his British & Irish Cup success with Munster ‘A’, was distributing swiftly and accurately from ruck to ruck, and Con continued to make inroads in attack as the pair grew in influence.

A brilliant multi-phase move saw Shane Daly and James Murphy both carry strongly twice and gain ground, and with Belvedere back-pedalling towards their posts, nice handling again created an opening and Quinlan’s skip pass sent winger O’Connell over for a neatly-taken eighth-minute try.

The well-worked score was converted with aplomb by Quinlan from wide on the left, the same player finding a terrific touch after Con had survived the first serious onslaught from Belvedere in their 22.

O’Keefe got Belvedere off the mark with a 22nd minute penalty from the edge of the 22, rewarding Ed Rossiter and Jack Kelly for a well-executed lineout and some solid carrying from the likes of Sean Coughlan, Paul Pritchard and Jonathan Slattery.

Pritchard’s opposite number Murphy returned the favour, shrugging off an attempted tackle and setting up a central penalty which Quinlan fired over for 13-3.

The sides swapped tries as the tempo increased approaching the interval, the ‘Belvo forwards delighting the home support with Rossiter’s 32nd-minute try. Slattery made a terrific break from a lineout and with James McWilliams-Gray making a big impact off the bench as a forceful carrier, fellow front rower Rossiter, who was a powerful carrier throughout, was able to crash over from close range.

O’Keefe’s conversion made it 13-10 but Constitution were very quick to respond. Captain Niall Kenneally claimed the restart and O’Connell’s quick feet and excellent offload sent Hayes over past Riordan in the right corner, the big lock showing great athleticism to reach out and dot down while avoiding touch.

Quinlan, who missed the difficult conversion, was short with an early second half penalty from near halfway, the swirling wind now favouring the Leesiders but Belvedere were playing with much more directness, albeit that their scrum was under near constant pressure.

The third quarter was a real dog-fight, at the end of which Kenneally lifted the Leesiders by winning a penalty at the breakdown and then threatening in the ‘Belvo 22. However, replacement Liam O’Connor’s overhead pass went forward as Con looked to take advantage of numbers on the left.

Suddenly, it was Belvedere who were looking dangerous at the other end, Karl Miller leading the charge and teeing off a barnstorming set of carries as brothers Michael Oyuga and Connor Owende used their physicality to punch holes around the fringes.

The end product was a close-in penalty stuck over by O’Keefe’s replacement Willie Staunton, which cut the gap to 18-13 with a quarter of an hour remaining.

After an uncharacteristic fumble from Riordan near his own posts, Con’s strong scrum had them on the cusp of a clinching try, however Cahill, who elected to break off the back, Hayes and Conor Kindregan were all held up close to the whitewash by the gritty Belvedere defence. The wind also pushed a Quinlan penalty effort to the right and wide.

Belvedere were bidding to be the first Bateman Cup winners from Leinster since Blackrock College in 1938/39, and Paul Cunningham’s charges really had the bit between their teeth during the closing stages.

They had a scrum back in an inviting position after O’Connell had kicked the ball dead, and then Con’s try-scoring winger was also pinged for a ruck offence in the 77th minute.

‘Belvo declined the three points and opted for a scrum, and a couple of phases later, their forwards were held up under the posts as Con’s reserve hooker O’Connor put his body on the line to deny them. The Leesiders were sloppy with ball in hand in the second period, but it was their hard graft and stubbornness in defence which eventually saw them prevail.

As Belvedere went wide deep in the Con 22, former Munster lock Hayes’ well-timed intervention at a ruck forced the ball to go loose and replacement Ross O’Neill gobbled it up on the deck, a subsequent penalty against Belvedere centre Coughlan allowing a relieved Con to see out their 10th successive Bateman Cup victory since 2013.