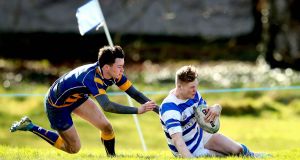 Garbally College remain on course to make it three Connacht Senior Cup crowns in succession after brushing aside Marist Athlone’s challenge in Thursday’s semi-final clash at their home field in Ballinasloe.

Second half tries from Adam Fogarty, Matthew and John Devine, Daithi Blackweir and Sean Horkan sent them into Wednesday week’s decider with no shortage of momentum. However, the 45-point margin did flatter the hosts in Ballinasloe as they trailed for most of the first half following Nathaniel O’Neill’s second minute try.

A Cian Treacy penalty on the quarter hour reduced arrears before Garbally finally made the breakthrough on 33 minutes. Seamus Egan stole possession behind a Marist lineout and a few phases later, Fogarty eventually crossed the line. Four minutes later, Horkan picked up his first try while two Treacy conversions left it 17-5 at half-time.

Marist had the stiff breeze in their favour for the second half but it was their opponents who whipped up a storm. Garbally’s backs applied pressure and after just three minutes, Conor Goode sent Fogarty over the whitewash.

Three minutes later, Matthew Devine got the fourth try as Garbally stretched 29-5 clear and they finished in style as John Devine, Blackweir and Horkan added further scores in the final quarter.

A hat-trick of tries from Hubert Gilvarry sent Sligo Grammar school back to the Connacht Senior Cup final for the first time in six years, as they edged out Roscommon CBS in a thrilling semi-final clash at Sligo.

Roscommon CBS, with 10 players lining out from the team that lost last year’s final to Garbally College, were considered strong contenders for this year’s championship but they struggled to find their rhythm in the early stages of this contest, running afoul of referee Shane Toolan.

Sligo Grammar led 3-0 when Toolan pinged (and yellow-carded) Irish international prop Jack Tucker after 27 minutes, and at that stage the penalty count was 8-0 to the home side. With Tucker in the sin bin, Gilvarry jinked across the line from close range and added a conversion.

He made a sensational return however, driving across the line in the first play after he returned to the field, and on the next attack Roscommon CBS earned a five-metre scrum and set up Darren Gately to go over in the corner.

Mark Purcell added two excellent conversions to make it 14-10 at the break, but the CBS failed to build on that lead and despite pounding the Sligo line in the third quarter, some incredible defensive play, with back row forward Kacper Palamarczuk to the fore for Sligo, held them out.

They paid the price as Gilvarry added two superb individual tries, one after 55 minutes and another in stoppage time, to set up a clash with Garbally College on Wednesday week in Galway.