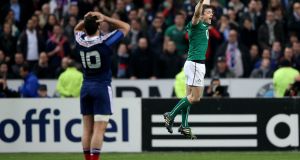 A Six Nations finale on a Halloween night that has banned trick or treating makes all the statistics feel redundant. Nevertheless, Ireland’s record at Stade de France is decent.

Since the concrete bowl in Saint Denis opened for business in 1998, Irish teams have escaped with three momentous victories, a draw and two near misses among eight defeats.

Better still, with six wins and a single loss against Les Bleus since 2012, Ireland players neither fear the ghosts of Paris nor a regenerative French side in full costume.

“I think the constant is that flair,” said Conor Murray this week. “If they get in behind you, get that offloading game going, then they can be really dangerous and you can end up chasing shadows.”

Or worse, needing to halt rampaging forwards in the Michael Myers mould.

“France in the past may have [always] had that but I think they’re learning to play as a unit, learning how to run off each other. I think that’s been a real improvement of theirs this season. They’re not just individuals going out to do something themselves. They have that danger, but they’re linking up well.”

Paris in the spring used to guarantee an awful experience for visiting players, particularly big forwards, with a pattern of assaults on and off the field (beware the misguided taxi driver late at night as Willie Duggan discovered to Ireland’s great cost in 1982).

Danger lurks around every corner. In 1998, Denis Hickie’s intercept was the first Irish try on French soil since 1980. Two years later Brian O’Driscoll glorious hat-trick sparked a period of high expectations that continues to this day.

Ireland captured the 2014 Six Nations title with a nerve-jangling 22-20 result that coincided with Joe Schmidt’s first season as coach. France were atrocious until the dying seconds when that flair, Murray warns about, suddenly appeared. The entire championship rested upon Dave Kearney rushing Pascal Pape into a forward pass, which prompted referee Steve Walsh to disallow Damien Chouly’s try in the corner.

Peter O’Mahony, Johnny Sexton – knocked out that day by a Mathieu Bastareaud charge – and Murray are the only survivors from six years ago.

“We’ve had success against them in recent times, but over the past year or so they’ve been growing, getting much stronger as a unit,” Murray continued. “They’re a lot harder to break down.

“We’re under no illusions how hard it’s going to be, but I thought we went well at the weekend and we’re confident in our own ability too. It’s where you want to be, there’s a trophy on the line.”

The Irish victories at Stade de France in 2000 and 2018 had one similarity: the coaches, Warren Gatland and Schmidt, had just introduced fresh faces to their set-ups. For Ronan O’Gara, Peter Stringer and John Hayes – eventual combined caps of 335 – see James Ryan, Jacob Stockdale and Dan Leavy.

On Saturday, Will Connors and Caelan Doris will compare their athletic abilities to a French backrow that took England apart last February.

“They have a quality backrow in particular, great carriers with Ollivon and Alldritt so we will have to be on our game,” said Doris.

“Stade de France is a tough place to go, as I’ve heard from the lads. It’s going to be a massive challenge. Speed of ball is hugely important and that stems from good breakdown work so we have put a lot of emphasis into that the last few days. That will be a big area for the backrow.”

In just three caps Doris has proved – as Ryan did in 2018 – that the rapid pace of Test matches will not pass him by.

“I love playing in the big games,” said the 22-year-old. “The excitement in the week building up to it and the day itself is a bit special. You probably get a bit extra out of yourself on the day. It’s incredibly special being involved in the big days.

“Even in my school days some of my better performances came in ‘the Cup’ and the bigger games so the extra excitement in it all bumps you up a level.”

The next leap, be it autumn or spring, is always the toughest.