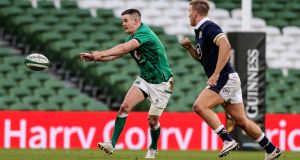 Johnny Sexton: one of the high-profile centrally-contracted Ireland stars whose contract is up for renewal at the end of the season. Photograph: Dan Sheridan/Inpho

Negotiations with many of the 90 or so centrally- or provincially-contracted players whose current deals expire at the end of next June have belatedly opened in the past week, sparking what is liable to be a frenzied month or two of delicate and sometimes difficult discussions.

Breaking with customary practice, at the end of last November the IRFU’s high performance director, David Nucifora, confirmed that negotiations would be suspended until the new year pending an end-of-year financial review by the Union. But this week the provinces have begun negotiations with agents and representatives of the players.

Seven centrally-contracted international players are up for renewal at the end of this season, including the Leinster and Ireland captain Johnny Sexton as well as Cian Healy, Tadhg Furlong, Keith Earls, CJ Stander, Peter O’Mahony and Iain Henderson. Most likely all of them will be offered new central deals, although these are likely to be reduced and a mixture of only one-year and two-year contracts.

It is understood Nucifora is still in Australia after making his annual return to his homeland before Christmas and it is unclear if all of these seven players or their representatives have been engaged by the Union yet. But all of them should have opened talks by next week.

These contracts could have a ripple effect on the four provinces, who will then have to foot the bill for players who are still likely to be playing Test rugby and in the upper echelon of their wage brackets. Nor might they be available for that many games, especially in the conference stages of the Guinness Pro14, but against that the first €110,000 of provincial contracts are paid for by the IRFU.

Central funding by the Union to the provinces has been reduced by 10 per cent, in addition to their own losses. Leinster, Munster and Ulster all have their budgets in place for the 2021-22 season, which is not to start until late September, and while their estimates are understood to be slightly reduced due to the effects of the pandemic, they are also based on the premise that supporters will be able to return in limited capacity to games in the first few months of next season. Connacht’s budget is due to be finalised with the Union next week.

All provinces are keeping close to the same squad strength – for example Munster are being reduced from 46 to 45 players – and similarly a mixture of only one- and two-year deals have been on the table.

Some players have already agreed new deals, some are less than happy and others are in between. Ulster appear to have been particularly quick out of the blocks, while there have been mixed signals as to whether there are Covid-related clauses, under which two-year contracts can be renewed after one year. But this may be waived.

Either way it’s liable to be a very active market over the next couple of months, with many players based in the UK unhappy with their initial offers while at the same time clubs in England, Scotland and Wales are also in the market for new players.

The Lions board convened on Friday to discuss the vexed question of this year’s planned tour of South Africa. The prospects of the tour taking place this year in South Africa are in severe doubt due to the new variant of Covid-19 which has hit the country and no imminent signs of a vaccination roll-out.

A decision on the Lions tour, whether to press ahead most probably without crowds, host a series against the Springboks in Ireland and the UK or postpone until 2022 or 2025, will have ripple effects on the Rainbow Cup.

However, in the event of the Rainbow Cup being cancelled, the Pro 14 organisers have contingency plans in place whereby the tournament would revert to a full, home-and-away 22-game Conference format, as well as restoring two quarter-finals and two semi-finals.

Meanwhile, the postponed game between Connacht and the Ospreys has been rescheduled for Sunday week, January 24th, at the Sportsground (kick-off 3pm), with the Scarlets-Cardiff game refixed for Friday, January 22nd in Llanelli. Munster host Leinster in between on Saturday week.