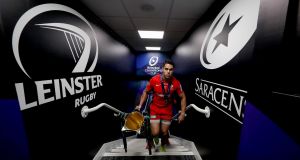 The Champions Cup final came down to the simple premise that the Saracens took more chances than Leinster and that was reflected on the scoreboard. Leinster captain Johnny Sexton acknowledged as much, so too head coach, Leo Cullen and Saracens director of rugby Mark McCall.

Matches of this ilk invariably come down to a handful of moments that are pivotal to the outcome and in that respect Saracens were worthy winners. They devised a game-plan and had the courage and self belief to stick to it. The rode their luck on one or two occasions but that is the prerogative of winners.

Clarity of thought and accuracy of execution let Leinster down on a couple of occasions, albeit under ferocious pressure, and while there was much to admire in their goal-line defence and the work of Scott Fardy (outstanding) and Cian Healy (brilliant) in winning crucial penalty turnovers at the breakdown, the defending champions afforded Saracens too many soft gain-lines and that facilitated the English club’s impressive power game.

The much touted ‘wolf pack’ mentality is the banner under which Saracens operate in defence and they provided a suffocating, claustrophobic pressure for Leinster ball carriers. Rarely committing more than one to the ruck, they charged off the line, gang-tackling the blue shirts and driving them backwards for the most part.

Leinster’s ball carriers were at times easily identifiable, occasionally taking ball from a standing start or hunted down in the backfield as they scanned the horizon for space of which there was precious little for the most part. No matter how imperilled Saracens defence seemed, the rarely dropped that line speed and it proved hugely effective in shutting down Leinster’s attacking game.

They came up hard from the outside-in, in an umbrella defence and denied Leinster the chance to get to the edges out wide.

Inside their own 22, Leinster defended with great resolution for the most part, but further up the pitch, the line speed was passive. Instead of looking to pressurise the Saracens player in possession, Leinster players often gave him time and that allowed Saracens to rack up the metres with impunity and also guarantee quick ball. Time and space waits for no defender.

That passivity with Leinster players shuffling sideways rather than coming forward allowed Saracens to pick holes and offload out of the tackle. Leinster had to work so much harder for territory and in a bruising, hugely physical contest and that was a significant factor.

Billy Vunipola intercepted three passes himself when Leinster were attacking, the last of which allowed Saracens to hoof the ball up the field and culminated eventually in Fardy’s yellow card and the match defining try for Vunipola. Jackson Wray was a thorn at the breakdown but Leinster will reflect on their errors that were to prove hugely punitive.

Tadhg Furlong, who apart from his try had a superb game, was stripped on one occasion, Garry Ringrose was turned over by Liam Williams on another while James Tracy, albeit a matter of seconds on the pitch, was penalised for a crooked throw. These are no means an exhaustive inventory, there were other aberrations.

Hindsight is an exact science but Sean Maitland’s try in first half injury time, converted by Owen Farrell, was a massive moment in the game. Leinster scrumhalf Luke McGrath elected to box-kick with the clock in the red. It was a bit of a nothing kick that was easily reclaimed by Saracens and when they cleverly pinned Rob Kearney in the ruck, Saracens won a penalty that led to the try.

Farrell kicked beautifully to the corner and Jordan Larmour’s decision to bite in and go for the intercept was borne of desperation. In terms of momentum the score was massive but from a Leinster perspective attributable to a chain of errors.

Ringrose will rue his decision to cut back inside rather than pursue what appeared as a significant numerical advantage out wide inside the Saracens 22. It wasn’t a foregone conclusion but a try was a probability if the ball was shifted wide.

Saracens game management was better on the three half dozen occasions that defined the outcome. Leinster never gave up, individually and collectively, but the better team on the day, prevailed.