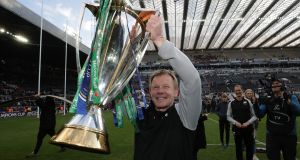 Mark McCall with the Champions Cup trophy after his side’s win over Leinster. Photograph: Billy Stickland/Inpho

You shouldn’t, of course, make promises you can’t keep, so Joe Molloy was taking a mighty gamble at the start of Virgin Media’s coverage when he promised us we were about to witness “an era-defining final”, Brian O’Driscoll going down a similar road over on BT by forecasting “a match for the ages”.

In fairness to the pair of them, they were close enough to being spot on, even those of us who wouldn’t know a Vunipola from a Vindaloo able to detect that this was a battle of the highly monumental kind.

“The intensity. . . I’m out of breath,” gasped Jamie Heaslip on Channel 4 in the very early stages of the game, and him sitting in his comfy co-commentary spot, while back on Virgin decidedly heavy breathing filled the air midway through the second half, leaving us fearing that Alan Quinlan was about to pass out from the tension of it all. But then the camera picked out the mic’ed up referee Jerome Garces, confirming it was his panting that we were hearing, the poor lad struggling to keep up.

It’s not often that you’d miss George Hook and his battle analogies, and the way Brent Pope would throw his eyes to the heavens when he set off on one, but we really needed a George battle analogy for this.

A quick spin on the Google suggested there were uncanny similarities between this Champions Cup final and The Battle Of Pharsalus in 48BC when Europe’s two leading armies, led by military titans Julius Caesar (Mark McCall) and Pompey Magnus (Leo Cullen) squared up.

Pompey’s lads took an early lead, but Caesar’s boys ground them down in the end, pushing the battlefield offside laws to the limit in the process, and were victorious. Pompey legged it to Egypt in the aftermath of his defeat and was later assassinated, but while Leinster fans are no doubt disappointed, you’d trust Leo won’t suffer a similar fate.

While going on to have a rather impactful career, Caesar, of course, didn’t have a happy ending either, “Et tu, Brute?” and all that, which, Matt Williams told us, is kind of how Mark McCall felt when his Ulster coaching days were done. We think George might be proud of this here analogy.

Matt then embarked on some conjecture about McCall now making himself a candidate for the Irish job, at which point Shane Horgan interjected with an ‘IT’S ALL MOOT!’ Andy Farrell, like. But with Saracens having reached seemingly indomitable levels, Matt reckoned McCall should be guaranteed a slot in any future shortlists.

And Matt had had a sense of foreboding before the game - “When Saracens play as they can, mate, they’re bloody good - they’re a bit scary” - but like the two Shanes, Horgan and Jennings, he allowed his beating heart overrule his concerned head and he tipped Leinster to triumph.

And early enough they were 3-0 up, but as we now know from Liverpool and Spurs’ efforts, trailing by three is no biggie. Soon enough, though, it was 10-0, a deficit that might even have been beyond Jurgen and Mauricio’s boys.

It wasn’t beyond Saracens, alas, 10-10 at half-time. Their supporters - Bill and Derek - went wild.

Leinster failed to trouble the scoreboard thereafter, resulting in a funeral feel to the summing up on Virgin, Joe reminding us that last November the rugby world was our lobster after we slayed the All Blacks, but since then it’s been a conveyor belt of hurt, us being mullered by England in the Six Nations, having to cope with Wales winning the Grand Slam, and now this, Saracens - sort of the ‘no one likes us, we don’t care’ of rugby - downing our Leinster.

Johnny Sexton, possibly the most peeved man in world sport after a defeat, promised Sinead Kissane that he’d review the video of the game to spot where it all went wrong, and you worried for his telly screen, it being most likely to end up in smithereens from the punching. As Matt noted, the five minutes before and after half-time were calamitous, what with the failure to insert the ball in to the stands before the break and not spotting a four-man overlap that would, almost certainly, have resulted in a try early in the second half.

But while he sat in Egypt, Pompey Magnus probably had similar regrets, missed opportunities and the like. When the final whistle blows, though, what’s done is done. And all you can do is holler ‘Hail, Caesar!’ Or, in this case, Sarries.