Billy Vunipola does his talking on the field 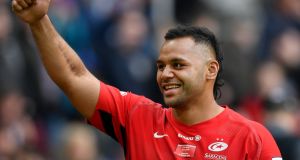 “What we needed from him was to do his talking on the field not off the field.” Photo: Dan Mullan/Getty Images

Inevitably, in the wake of capturing the Champions Cup, Saracens director of rugby Mark McCall was asked about Billy Vunipola.

“It’s obviously been a complicated five or six weeks, I guess, for him and for the squad, to be honest, as well,” said McCall in reference to Vunipola’s social media comments in support of Israel Folau that resulted in formal warnings from both Saracens and his other primary employers the England Rugby Football Union.

“What we needed from him was to do his talking on the field not off the field. He has been really good and his teammates have supported him really well.”

Vunipola was wonderfully effective - grabbing three interceptions and powering over for the game defining try on 66 minutes.

“10-nil down and losing Maro (Itoje) to the sin-bin, I just thought the players handled that incredibly well,” McCall continued. “To score before half-time was massive. Then we had one really massive defensive set early in the second half. I think it was George Kruis who got the turnover. Thereafter, I thought we were very good.”

As good as McCall has ever seen Saracens.

And that’s saying something.

Not that much talking is needed by coaches with this special group.

“Our players took control at half-time,” added the former Ulster and Ireland centre.

Three time winning European captain Brad Barritt made a curious observation about Itoje’s 10 minute dismissal: “There were a few words said behind the posts, Owen (Farrell) in particular,” said the South African of that key period when Leinster took a 10-0 lead.

“It was almost like the Maro yellow card released us. Allowed us to play our game.”

Rare is the team that can produce enough belligerence to improve despite losing one of the best players on the planet. But Saracens did just that.

1 Seán Moran: Boylan documentary offers a compelling insight into former Meath boss
2 Gerry Thornley: Irish system to face its acid test in front-loaded return
3 Stirling and Balbirnie tee off to tee up another famous Ireland win over England
4 ‘A win like that is special and one we’ll remember forever’ - Ireland skipper Balbirnie
5 FAI ‘will come down hard on clubs’ that flout Covid-19 restrictions
Real news has value SUBSCRIBE