Johnny Sexton: “It’s not a good decision to box kick it when you cough up a 10-3 lead” 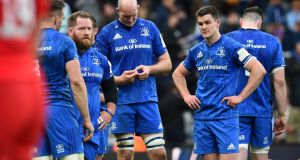 Leinster players react to their defeat on the field after the European Rugby Champions Cup final. Photograph: Glyn Kirk/Getty Images

Hindsight is 20-20 vision goes the cliché, and in mitigation of Leinster’s decision not to kick the ball off the field when the clock had passed the 40 minute mark and so declare their first-half lead at 10-3, Johnny Sexton ventured that hindsight is the ultimate barometer.

“I think at the time it was to stick the ball on Billy Vunipola, he was standing on the 22, try to win the ball over his head and try to get a two score lead before half-time.”

Alas, opting for a box kick at 10-3 led to Saracens drawing level at half-time.

“Obviously, we kicked the ball close to their 22, and you don’t want to concede a penalty and be defending a 22 lineout. Your decisions are as good as they are in hindsight,” said Sexton.

“We made a ballsy decision when we were 3-0 up to go for a scrum and not take three points. It’s a great decision because we scored. It’s not a good decision to box kick it when you cough up a 10-3 lead.”

This was compounded by Leinster failing to press home their supremacy early in the third quarter when Garry Ringrose stepped back into traffic with five on three outside him after an exchange of offloads by James Lowe and Sexton had put the Sarries’ defence on the back foot.

Reflecting on that, Sexton added: “That period just before half-time and that period just after half-time where we had maybe two or three chances to score, that’s how it felt when we were in their 22 pounding away at their line, when we got so close to their line a couple of times and didn’t take advantage of the overlap or we coughed up a couple of offloads or a turnover on the deck.

“That 20 minute period before and after half-time was crucial in the end,” he said ruefully.

Saracens ultimately pulled away in the final quarter, demonstrating what a remorseless front-running side they are to close out their 20-10 win, so claiming their third Heineken Champions Cup.

In the process, they denied Leinster a record fifth title, and head coach Leo Cullen, who had been a player for the first three and head coach last season, admitted: “We’re obviously very gutted. We pulled up outside the ground there and you see the sea of blue of support. We’re gutted for all the players, everyone who travels to the game.

“I thought it was a great occasion out there. I thought our guys started the game really well and created lots of opportunities, built that lead. Everyone is going to talk about the period either side of half-time because that’s where Sarries score some points and we give up the advantage that we had built.

“But there are so many different moments in the game. Even with what Johnny is saying, we created loads of opportunities but you just need to make sure you nail the chances. We were up against a very, very good team. You see the size of some of those Saracens guys. They’re a big, big, physical team with lots of quality.

“As we’ve seen on countless occasions over the last few seasons, when a team is trying to chase the game against them it becomes very difficult because they’re so aggressive in the middle of the field and they’re very comfortable defending and putting the squeeze on teams. I thought they did that very well.

“They probably strangled us then in the last 20 or 30 minutes, once they had a lead.

“There’s some big calls at various different stages of the game, which we probably missed out on and that’s ultimately how we lost the game. We’re gutted, we’d love to be sitting here with a more positive outcome but full credit to the players and the way they’ve applied themselves, the way everyone has worked behind the scenes to make sure we’re in good shape at the end of the season.

“We just need to dust ourselves off now. We’ll talk about so many different areas of the game but we need to just try and move on as quickly as possible because we have a huge game against Munster next Saturday,” said Cullen in reference to next Saturday’s Pro14 semi-final at the RDS, with the auld enemy lurking in the long grass.

The abiding memory from a gripping final was the unrelenting power and physicality of this huge and hugely imposing Saracens side.

“Yeah, it was ferocious,” said Sexton. “It was Test-match stuff. We knew it was going to be. The one thing I will say is I’m incredibly proud of everyone, the way we fronted up and never took a backwards step.

“There were times when we weren’t missing any tackles and we were conceding maybe half a yard then half a yard and they’re very good at what they do. They try and steamroll and at times they did that very well.

“It’s a big regret. You’d love to go and play the match again, but you don’t. You never want that to happen in a final, you want to have no regrets and we’ll look back at some key moments, especially at the start of the second half when I just felt we had the upper and we didn’t quite capitalise on it.”

“I think we know what to expect, but they’re big, big men; very big men. Like, you stand out in the tunnel there and you see the size of Billy Vunipola, Maro Itoje and Will Skelton in particular, and we don’t have access to that many types of players,” he admitted, with one of those wry laughs of his.

“For us, I thought our guys fronted up unbelievable well, stuck in so many collisions, were dominant in a lot of collisions, particularly early in the game with some of those big men running at them. But it does take its toll for sure.

“I thought the Saracens bench came on and did well. I thought Vincent Koch in particular provided a lot of energy considering he was on after 30 minutes. I thought he carried very, very strongly. Their scrum was good as well; they probably just had the upper hand on us in the last 20 minutes whereas probably in the first-half I thought we had a little bit of dominance.

“Again, it’s such fine margins in these games, and yeah, Saracens were the better team on the day.”