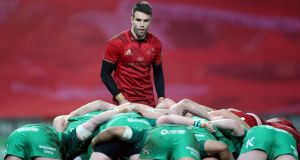 The final score-line brooked no argument, Munster value for their bonus-point victory, largely on the strength of a more cohesive, ruthless and accurate second half performance in which they scored 29 points before Connacht managed a solitary riposte with the outcome long since decided.

The home made much better use of the strong wind in the second half, the outstanding Ian Keatley switching between long, raking diagonal kicks and then running intelligently when provided with the perfect front-foot ball by his forwards.

The Munster pack produced a relentless intensity that eventually wore down a gutsy Connacht side. The visitors will reflect on a few opportunities in the first half that went abegging but in truth their patterns lacked nuance and there was no appreciation of the space in behind; they shovelled ball on at times when it would have been better to kick in behind.

Conor Oliver, returning from injury was adjudged man of the match but there were several contenders in the pack. Andrew Conway had a superb game on the wing, Chris Farrell too was strong on his return from injury, Conor Murray directed affairs with his unfussy eloqunce but it was Keatley who provided the creative spark.

Connacht will be disappointed at the final margin but there are aspects of the game that will bear the post match scrutiny; the scrum and individual performances like those of Jarrad Butler, Cillian Gallagher, Caolin Blade, props Peter McCabe ad Conor Carey and before his trip to the sin bin, Quinn Roux. Munster scored 14 points when the Connacht lock was off the pitch.

As a statement of intent Connacht’s play in the opening exchanges was compelling in ambition, Niyi Adeolokun’s little stutter-step taking him on the outside of Keith Earls as the visitors sought to put width on their attacking patterns.

Connacht’s early enterprise was rewarded with a penalty, when Rory Scannell was penalised for kicking the ball out of a ruck and Jack Carty punished the indiscretion with a well-struck 27-metre effort. Munster briefly went to the air, through Conor Murray’s box-kicks but Connacht fullback Tiernan O’Halloran was unfazed by the bombardment.

The visitors will also have taken heart from the scrum, winning three penalties in that facet of the game, while conceding just the one. Munster decided that hanging onto the ball would be a better option and this was vindicated when CJ Stander burst clear through the centre of a ruck and chipping into the Connacht 22.

O’Halloran initially rescued his side, Carty then lost the ball but Connacht scrumhalf Caolin Blade won a brilliant penalty turnover at the ruck, three metres from his own line, after Pita Ahki had made a try saving tackle on Murray.

A quick brace of penalties took the western province to the home side’s 22 but Jack O’Donoghue cleverly insinuated his way into the maul to force a scrum turnover, and a matter of seconds later repeated the feat, this time forcing a knock-on.

It took until the 17th minute before Munster managed their first real concerted passage of cohesive rugby, mixing up the point of attack cleverly that culminated in a lineout in the Connacht 22. They then demonstrated a ruthlessness that Connacht lacked by converting the opportunity into a try.

Chris Farrell, enjoying a big game on his return from injury, ran over Eoin Griffin inside the Connacht 22 and from the recycle Murray’s pass and O’Shea’s run were both perfectly timed to allow the secondrow to force his way over from close range. Ian Keatley added the conversion.

The home side then conceded a brace of penalties and from the second, Carty landed his second successful kick at goal, this time from 37-metres.

Connacht won a second scrum penalty, this time inside their 22 but from the ensuing lineout, McCartney overthrew and the home side quickly return from whence they had just come. It was an error that ultimately cost the visitors three points, Keatley’s 25-metre penalty, nudging the home side into a 10-6 lead on the half hour.

Connacht continued to hang onto the ball but progress was minimal and to be honest lateral in orientation for the most part. Griffin rescued his side after intercepting Andrew Conway’s inside pass in the Connacht 22, the Munster winger getting outside Healy and making 30 metres. Quinn Roux, he had an excellent opening 40-minutes as did Jarrad Butler and Cillian Gallagher in particular, forced a knock-on from Stander as Munster threatened again; it was the final action before the interval.

The game continued to be pockmarked by errors from both teams but Munster started to get more front-foot ball, their power beginning to take its toll as they cracnked up the intensity. Keatley tagged on a penalty on 50-minutes and a gorgeous grubber kick from the outhalf took a wicked bounce that deceived O’Halloran and allowed Conway to outmuscle the Connacht fullback to the touchdown.

It was sharp work from the Munster wing and Keatley’s conversion merely rubbed salt in the wound as the home side eased into a 20-6 lead heading into the final quarter. The Munster outhalf’s game management was a catalyst in his team’s change of fortunes, initially with his beautifully controlled wind-assisted kicking and then his running lines and vision.

He offered a great example of the latter in the build-up to a try from Keith Earls, drawing defenders on a mazy run before timing his offload to the supporting Conway perfectly; the latter fired a great cut out pass that allowed Earls an unencumbered run to the corner.

Connacht’s night got a great deal worse when Roux flipped Earls over in a tackle with the Munster wing coming down on his shoulder/head. Referee David Wilkinson in consultation with the television match official Kevin Beggs decided on a yellow card but it could and probably should have been red; the duty of care rather than malice the issue.

The home side exacted maximum retribution within a couple of minutes, Murray forcing his way over from close range for the bonus point try, his side’s fourth. The only matter up for debate at this point was the final margin and that became bleaker for the visitors when Murray grabbed his second on 69 minutes. It was to be his last involvement.

Connacht’s consolation, and it will seem meagre given the effort they put in, was a reward for perseverance, hooker Tom McCartney crossing for a try in the corner after come excellent work from replacement scrumhalf James Mitchell. Craig Ronaldson kicked a fine conversion.

Munster though were worthy and deserving winners, bringing a greater game intelligence in using the conditions in the second half, epitomised by Keatley’s performance, as he maximised the work of his pack to create the game defining scores.