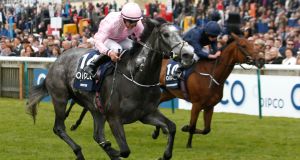 It was like old times for Aidan O’Brien at Newmarket on Sunday when he completed the Guineas double for a third time although it was Winter and Ballydoyle’s new boy Wayne Lordan who did the honours in the fillies classic.

Twenty four hours after Churchill provided Ireland’s champion trainer with a record eighth victory in the 2,000 Guineas, his jockey Ryan Moore had to settle for second place in the 1,000 after the unlucky 5-4 favourite Rhododendron failed to overcome trouble in running.

Instead it was the 9-1 Winter – who had been as high as 33-1 in ante-post betting a week previously – that justified a gamble to give 35-year-old Lordan a dream start to his new job as one of the support riders to Moore at Ballydoyle.

Winter had been trained as a juvenile by Lordan’s old boss, David Wachman, whose decision to retire at the end of 2016 lead to her transfer to O’Brien. Lordan rode her on her first start of the season and kept the ride on Sunday to secure his first classic success.

“This means a lot. I started in January and I’m very grateful to Aidan for letting me keep the ride,” said the Co Cork-born rider who stepped aside for Moore when the Wachman-trained Legatissimo won the 1,000 Guineas for the Coolmore owners in 2015.

Lordan famously rode the sprinter Sole Power to a 100-1 success in the Nunthorpe Stakes in 2010 and also secured Group One victories on Slade Power as well as two on Legatissimo.

His new association with Ballydoyle began at the start of the year but prior to Winter’s classic win it had been most notable for a controversial ride on the O’Brien-trained Music Box at Dundalk at the end of March.

The penalties imposed under new ‘Non-Trier’ rules included a five-day ban for Lordan which he subsequently failed to reverse on appeal.

O’Brien vigorously defended the rider at that appeal hearing and his faith in Lordan was vindicated in style on Sunday.

As the third O’Brien runner, Hydrangea, helped cut out the pace, Winter kept close tabs and struck for home over two furlongs out.

However if at the same stage on Saturday Moore made a decisive move on Churchill to secure the stands rail, this time the Englishman was briefly blocked on Rhododendron, ironically partly by the weakening Hydrangea, and was forced to snatch up.

Rhododendron ran on noticeably well but having lost momentum came up two lengths short of Winter with Daban back in third.

The result meant a third Guineas double for O’Brien, after 2005 and 2012, a fourth 1,000 success, and a 27th British classic in all for the record breaking trainer.

“David [Wachman] told us last year he thought she was real good and was going to be a classic filly. He thought the world of her and Wayne gave her a great ride,” said O’Brien who’d earlier on the Newmarket card won the Dahlia Stakes with Somehow. “The other filly came home very well and she’s a filly that’s going to say very well.”

Sure enough Rhododendron was made a 5-2 favourite for the Oaks next month while Winter is as low as 6-4 to double up in the Irish 1,000.

Inevitably however at the world’s most commercially successful bloodstock operation it is classic options for the colts which takes priority and the focus now will be on a possible Derby tilt by Churchill.

The first of a series of major Epsom trials took place at Leopardstown less than 20 minutes before Winter’s Guineas and although a Ballydoyle 1-2-3 was led home by the stable’s 7-1 outsider Douglas Macarthur, final distances of a head and a short head hardly suggested conclusive evidence of a potential Derby hero.

Instead some bookmakers trimmed Churchill’s Derby odds to 5-1 although he is half those odds with one prominent layer.

With Cliffs Of Moher likely to appear at Chester this week, and York’s Dante still to come too, it was no surprise that O’Brien wasn’t prepared to commit himself about his latest superstar colt although a sixth Derby would see him emulate his legendary Ballydoyle predecessor, Vincent O’Brien.

“He has a lot of options, distance is usually not a problem to a Galileo, ” he said before stressing that any final decision on Churchill’s next start will be made by the Coolmore owners.

However he did add: “You’d say he’d definitely get a mile and a quarter well. Obviously a mile and a half you’re never sure, but he can go a lot of roads.”

Whether that road will be at a mile or a mile and a half could yet be dictated by whether or not a stable companion puts up an impressive enough trial performance to suggest it can fly the Ballydoyle flag at Epsom with confidence.

Douglas Macarthur might not be that proposition but he did plenty right in the Derrinstown Derby Trial to beat his stablemates Yucatan and Capri.

Another of O’Brien’s support jockeys, Emmet McNamara, cut out the pace on the winner who battled on well and had his Epsom odds halved to 20-1.

“They’re three very nice horses and it was nice to be on one of them. He shouldn’t have any problems getting a mile and a half. Staying won the day for him. He’s very uncomplicated and I see no reason why he shouldn’t act around Epsom,” McNamara said.