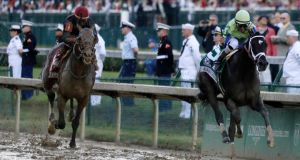 A dark cloud has been hanging over the Kentucky Derby as horse trainers have made public their anger at US President DonaldTrump’s immigration policies, which they say are hurting the Kentucky Derby, the US’s most glamorous horse racing event.

“We can’t find workers this year – it’s been tough,” says Julio Rubio of the Kentucky Horsemen’s Benevolent and Protective Association. “Most of the workers we have at the track won’t even leave to go out at night to buy groceries because they are so scared of being deported.”

The horse racing industry is big business in Kentucky. It brings more than $4bn a year to the state. The owners of horses at Churchill Downs racetrack are among the country’s economic elite; derby winners can bring in purses that easily exceed $1m.

This year’s renewal was won by favourite Always Dreaming under John Velazquez on a sodden track.

But the race, and the work of the wider industry, rest largely on the backs of an immigrant workforce making on average $400-$600 a week as well as free lodging in a huge dormitory inside the Churchill Downs complex. The skilled work typically requires a regular crew of guest workers, who live in Mexico in the offseason. However, as a result of Trump’s immigration crackdown, many horse workers were unable to make the trek to Churchill Downs this year.

Horse owners have spent the week criticizing the effect that Trump’s immigration policies have had on this year’s derby.

“There’s a lot of uncertainty about whether or not we are going to have the labor force we need,” Dale Romans, the second-winningest trainer in Churchill Downs’ history, told the UK’s Channel 4 News this week.

The owners are not the only ones who are angry. Heavy rain last Thursday marred the Pegasus Day parade that marks the opening of the annual Kentucky Derby festival. But Sarah Nunes, a member of Mijente, a national organization of Latino activists, wasn’t going to let it put her off. “Don’t worry, we have mint juleps and bourbon back there,” she joked before heading out to protest in the freezing rain.

Nunes led a group of half a dozen Mijenete activists dressed in the dark green sashes that prizewinning horses at the Derby wear. They handed out flyers calling on Louisville to become a “sanctuary city”.

The normally festive parade had turned into a mess of ponchos and crying children. But despite the cold weather, the crowd’s reaction to the flyers, featuring a mint julep and calling on activists to “#CrushIce”, appeared to be warm.

Activists with Mijente said the Derby marked the first time the state’s economic elite had addressed the issue of immigration.

“It’s hypocritical,” said Jesus Ibanez. “We are glad that they are concerned for the individuals working at the horse stalls, but this has been happening throughout the city, and they say nothing.”

Ibanez said that since Trump had taken office, approximately 100 undocumented immigrants had been arrested in raids in the Louisville area. He described fear in the community amid stories that mothers had been arrested when walking their children to school.

“My God, I was getting calls left and right from families not taking their kids to school,” said Ibanez. “They weren’t going anywhere outside of their homes.”

Despite the relative silence of the business community regarding the raids, Nunes said that she saw the outrage on behalf of horse owners as a sign of progress for the growing immigrant community in Louisville.

“We have really been embraced,” said Nunes. “Communities are coming out for us – lesbian groups, Black Lives Matter, the unions, the churches – they all come out for us. People are loving that Latino people are getting organized here in Louisville.”

The activists, owners and the crowds seemed to be making the best of the parade, and the weather, until someone spotted Kentucky’s notoriously anti-union Republican governor, Matt Bevin.

The immigrant activists started booing him and Bevin quickly fled to the other side of the street to continue his glad-handing with the crowd.

But when cornered Bevin too expressed concern about how immigration policies are affecting the Kentucky Derby this year.

Back on the sidewalk on East Broadway, Nunes said she was shocked by Bevin’s statements.

“Is it an opening? Yeah, I do think it’s an opening, but the people they are having conversations with aren’t people like us. It’s business owners,” said Nunes. “We are people that want to live in a society that is safe and fair, and where we do not have to worry about driving and getting pulled over and being deported. These are the kind of people they should be talking to.”