Seamus Heffernan can enjoy a bumper Sunday harvest at Leopardstown 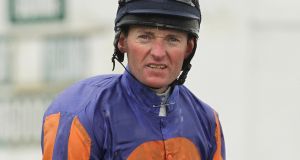 Seamus Heffernan: can look forward to half a dozen rides at Leopardstown, headed by Derby prospect Yucatan. Photograph: Morgan Treacy/Inpho

Seamus Heffernan is on board Aidan O’Brien’s Qipco 2,000 Guineas outsider Spirit Of Valor at Newmarket on Saturday but skips Sunday’s 1,000 Guineas to team up with Yucatan in Leopardstown’s Derrinstown Stud Derby Trial.

It leaves the way open for O’Brien’s latest jockey recruit, Wayne Lordan, to maintain his association with Winter in the fillies classic while another Ballydoyle stalwart, Pádraig Beggy, retains the ride on Hydrangea.

With 13 Ballydoyle declarations at Leopardstown Heffernan can look forward to half a dozen rides and the principal focus is likely to be on Yucatan who is a 20-1 shot for Derby glory at Epsom next month.

The veteran rider has won this €100,000 Group Three contest in the past on four of Ballydoyle’s top runners – Galileo, High Chaparral, Dylan Thomas and Fame And Glory – and appears to be one the O’Brien No.1 this time.

Heffernan rode Capri on that occasion but switches to the regally bred Yucatan in a race where the first two from a course maiden, Insayshable and Naturalist, take significant steps up.

Heffernan partnered Elizabeth Browning to win her juvenile maiden at Leopardstown and is back on board when the filly makes a quick reappearance in the Group Three Guineas Trial.

Elizabeth Browning ran last Monday at Naas when running on well to be fourth in the Athasi to Rehana. With that run under her belt she can prove hard to beat.

Quick ground conditions could prove crucial to Cougar Mountain bouncing back from a disappointing run at Sandown last week in the Amethyst Stakes while Heffernan is likely to fancy his chances on Sioux Nation in the juvenile maiden.

Wayne Lordan warms up for this classic spin with a single ride at Cork’s Saturday card which sees Ana O’Brien take the reins on the sole Ballydoyle runner Sir Edwin Landseer.

Ger Lyons’s Harbour Beacon could be a better option in that conditions race however and his stable companion Sandstorming also looks to hold decent claims in the preceding maiden.

Ruby Walsh will be on duty for three rides at Wexford including Veinard for Gordon Elliott in a conditions hurdle.

Willie Mullins can kick off the Saturday jumps fixture with a winner when his nephew Danny teams up with Miss Sapphire in a mares maiden hurdle.

Galway expose Wexford’s lack of Plan B to reach Leinster final 20:36
Jota forgets penalty miss to steer Liverpool past West Ham 20:08
Dean George bags a hat-trick as Athlone stun Shels 19:27
England lay down marker for Ireland after bonus point win in Rome 19:09
Dublin return from the dead to give Kilkenny a scare in Croke Park thriller 18:57
Here is your handy guide to sport on television this week