Churchill and Rhododendron the weekend classic favourites for top trainer 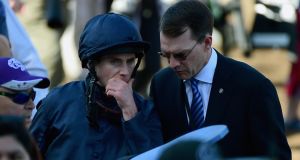 The 2017 classic season opens with a trans-Atlantic ‘Churchillian’ flourish this weekend and on this side of the pond it is Aidan O’Brien’s pursuit of a record eighth victory in the Qipco 2,000 Guineas at Newmarket which takes centre stage.

The legendary Englishman John Scott won the Guineas seven times in 20 years during the middle of the 19th century but Ireland’s champion has already  trumped him with seven of his own already between 1998 and 2015.

Now O’Brien is widely presumed to hold a new Guineas ace in Churchill ahead of the smallest Guineas field in a generation but one which compensates for a lack of quantity with an undoubted dash of quality.

Only ten colts will face the iconic Rowley Mile test on Saturday, a notable contrast to what will happen in Churchill Downs at 11.46 later that night when a maximum field of 20 Run for the Roses in the Kentucky Derby.

It’s four years since O’Brien’s last fruitless effort to win America’s most famous race and overseas interest in the greatest two minutes of US sport is this time confined to Godolphin’s Thunder Snow and jockey Christophe Soumillon.

If Always Dreaming is a suitably named market leader for fans to latch on to as a potential fifth winning ‘Durby’ favourite in a row then Churchill appears a suitably imperious and dominant presence at the top of the Guineas betting.

Europe’s champion juvenile of 2016 follows the tried-and-trusted O’Brien pattern of sending Ballydoyle’s No.1 hope to Newmarket without a prep and with plenty praise for his classic potential already swirling in the Spring air.

So it does no harm to recall how the dangers of falling into the hype trap were rarely better illustrated than by Air Force Blue’s Guineas debacle just a year ago.

The colt, acclaimed by O’Brien as the finest two year old ever to pass through his hands, started odds on and beat just one home. Instead it was the 14-1 Galileo Gold who won out. Two years prior to that and Night Of Thunder upset two genuine classic stars in Kingman and Australia at 40-1.

Both were costly reminders to favourite backers that the Guineas starts the classic programme and by definition can often be as much an exercise in discovery as it is in classic coronation.

Perhaps that applies as much to Sunday’s 1,000 Guineas even more. The unpredictable nature of fillies, especially early in the season, means outstanding winners such as Minding a year ago are mixed in the roll-of-honour with one-hit wonders like Homecoming Queen and Virginia Waters.

When the latter two scored in 2012 and 2005 respectively they completed Guineas doubles for O’Brien and Rhododendron has been clear favourite throughout the winter and spring to become his fourth winner of the fillies classic.

She is joined by two stable companions, Hydrangea and the well-backed Winter. The Irish challenge is completed by the Moyglare winner Intricately, a first classic runner for O’Brien’s son, Joseph, and victory for her would confirm the former champion jockey’s remorseless rise towards the top of the training tree.

O’Brien Jnr knows better than anyone though that commercial breeding realities make a 2,000 Guineas victory near priceless. He rode Camelot to success up the Rowley Mile in 2012 so will appreciate the pressure and expectation on Ryan Moore when he gets on Churchill.

Such has been the surge of ante-post support that some bookmakers are betting on Churchill’s winning distance, a reflection of the colt’s reputation but also possibly a dangerous dismissal of some very high class opposition.

O’Brien’s attack also includes Lancaster Bomber and Spirit Of Valor but Godolphin is also triple-handed and in Barney Roy appears to have a colt almost certain to progress significantly from his Greenham trial success.

The Craven winner Eminent would be much shorter in the betting if his connections were more high-profile.

It’s such a consideration which on form terms alone makes it open to conjecture if Churchill would be such a hot favourite if he wasn’t the clear No.1 of what is undoubtedly European racing’s No.1 operation.

Churchill brings an exciting cocktail of ingredients to the classic party, including looks that have earned comparison to perhaps the most intoxicating equine name of all, Nijinsky.

The legendary Triple Crown winner enjoyed little more than a Guineas saunter in 1970 when outclassing his opposition. If Churchill similarly outclasses this opposition, and in particular the French star, Al Wukair, then the hype machine really will go into overdrive.

Al Wukair represents France’s training maestro, Andre Fabre, who knows a thing or two about classic champions as well and he has unambiguously come out already and said he can’t see the Prix Djebel winner out of the first three.

Fabre isn’t normally given to such flourishes. But with so much to be revealed during just a minute and a half of frantic action on Saturday afternoon it could be something to pin betting hopes to.

1 Next stop the Champs-Elysées in green for Sam Bennett
2 Born to ride, born to win: Sam Bennett, the making of a green machine
3 Let’s face it, Saracens don’t really care that they are rugby’s most hated team
4 Leeds win seven goal thriller as Premier League returns to Elland Road
5 Keith Duggan: Surreal story of John Delaney needs to act as a wake-up call for FAI
Real news has value SUBSCRIBE

Leeds win seven goal thriller as Premier League returns to Elland Road 17:29
Superior Germans get job done to take top spot from Ireland 16:33
Next stop the Champs-Elysées in green for Sam Bennett 16:07
Donegal footballer tests positive for Covid-19 forcing squad into isolation 15:30
Everton come from behind to put five past spirited Baggies 14:57
Here is your handy guide to sport on television this week