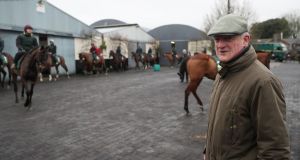 Willie Mullins at his yard at Closutton, Carlow. “We’ve got good chances in the Gold Cup. We have our chances in the Champion Hurdle.” Photograph: Brian Lawless/PA

Twenty four hours after Gordon Elliott announced he plans to send his biggest ever festival team to Cheltenham, Willie Mullins confirmed his runners will be reduced.

Mullins is the most successful trainer in Cheltenham history and has got into the habit of sending mammoth squads of up to 60 horses to jump racing’s most important week.

On Wednesday, and with less than three weeks to the start of the festival, he indicated that figure will be reduced to about 40.

The fortunes of Irish National Hunt racing’s two most pivotal figures have become so intertwined that such numbers always get parsed for significance.

It is especially the case since Elliott has assumed Mullins’s previously unchallenged position as the festival’s leading trainer for the last two years.

The nature of their rivalry is that Mullins fans can point in reply to a healthy lead in the race for the trainers’ title as Elliott continues to struggle to loosen the older man’s grip on the championship.

Perhaps only in jump racing though does a single sporting week come close to trumping the rest of the year, and right now the specific focus on Cheltenham excludes overall considerations.

Mullins gets that better than anyone. His festival tally of 61 winners means he leads the British champion Nicky Henderson by one.

It’s a stunning accomplishment by an Irish trainer and perhaps the finest achievement of what is already a seminal career.

But mastering the art of winning at Cheltenham doesn’t mean even he can make the weather play ball, certainly not during a freakishly arid Irish winter that has prevented him preparing all the horses he’d like.

“It’s been hugely frustrating, especially for our novices and bumper horses. We just didn’t get them out,” Mullins admitted at his traditional pre-festival media day. “It’s been an extraordinary year. I’ve never seen a year like it. We keep thinking the rain will come but yesterday and today are probably the only winter days we’ve had,” he added.

Mullins added up the number of meetings this winter with genuinely soft ground on one hand, perhaps the last of them being the Thyestes fixture at his local Gowran track.

The impact of such perpetually quick going has restricted the chances of stalwarts such as Un De Sceaux to run. Perhaps even more importantly it has impaired opportunities for the all-important novice crop to gain experience.

Rather than risk such embryonic talent getting injured the champion trainer has had to accept that the weather fates have conspired against normal Cheltenham service.

However if he’s down in quantity, the quality of Mullins’s squad remains the envy of most everyone else, maybe even Elliott.

If he has the ten-time Grade One winning superstar Apple’s Jade for the Champion Hurdle, her former trainer has the unproven but potentially outstanding mare Laurina.

A couple of hours prior to her ultra-smooth warm up success at Punchestown, Mullins told reporters he was worried about the potential impact of vaccinating his string against equine flu a few days earlier. Laurina shrugged it off in style and is still unbeaten for her trainer.

Elliott has another top mare for the Gold Cup in Shattered Lover but in the biggest prize of all it is his rival who holds the numbers edge.

Mullins has four contenders for steeplechasing’s ‘Blue Riband’ including the Irish Gold Cup winner Bellshill and the surprise Christmas Grade One scorer, Kemboy.

Having famously finished runner-up six times in the Gold Cup, there would be more than a hint of irony if the weather conditions Mullins has been cursing all winter finally help him win the race he covets most of all.

“Kemboy put in a huge performance at Christmas in Leopardstown on very good ground. If it came up like that on the fourth day of Cheltenham – which it can – he must have a very good chance,” he said.

“I think the further he goes the better he’ll be too. He’s one that has sort of jumped out this season,” added Mullins who indicated quick going could help Bellshill’s chance too.

Between weird weather and compulsory flu-jabs, factoring in 48 hour declarations as well as restrictions on horses running just once during the week, the run-up to Cheltenham 2019 has been unusual.

Perhaps the most glaring part for punters has been the absence of Mullins horses topping ante-post markets. The defending champion Benie Des Dieux is his sole Grade One market leader.

Asked about the strength of his team Mullins admitted on Wednesday: “It wouldn’t be as strong as other years and we will be only about three-quarters in terms of numbers. “

That’s a statement that reflects the unparalleled standards he has set at the festival over the last decade.

“As I always say if we can get one winner on the board, we can work up from there. We’ve got good chances in the Gold Cup. We have our chances in the Champion Hurdle. We’ll be well represented in the handicaps.

“I couldn’t see us having the same sort of year as other years but hopefully we’ll have our chances,” he added.