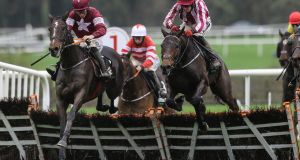 Dethroning Willie Mullins as Ireland’s champion trainer is Gordon Elliott’s greatest ambition so he can take Abacadabras’ Grade 1 victory at Punchestown on Sunday as an encouraging omen.

Mullins’s unrivalled top-flight dominance of the Morgiana Hurdle had stretched to nine years. This time however his latest star Saint Roi fluffed his lines in the first Grade 1 of the season over flights.

That the 10-11 favourite did almost everything wrong and still got to within a neck of Abacadabras at the line must mean Champion Hurdle ambitions are still intact.

But defeat underlined Elliott’s dominance of Sunday’s action as the man determined to end his rival’s 13-year reign at the top of the trainer’s pile saddled a four-timer.

It took Elliott to within touching distance of a century of winners in Ireland for the season, widening the crucial prize money gap to Mullins in the process.

Since the latter has repeatedly managed to overhaul Elliott in the lucrative final stages of the season in the past he is still a 1-2 favourite to stretch his title streak to 14.

However Saint Roi’s failure to make it landmark 10 for Mullins in the Morgiana reflects the danger of taking anything for granted.

It’s an enviable role that’s accompanied by a profile which guarantees no escape from criticism when things go wrong and Walsh endured a nightmare spin on Saint Roi.

Last season’s County Hurdle winner raced much too free off a slow pace on heavy ground.

Walsh could never get him to switch off and a mistake at the second last dropped Saint Roi back to a hopeles looking last of the five runners.

Coming to the last it was the 22-1 outsider Coeur Sublime who briefly looked the most likely winner.

However the messy nature of the race was reflected in how he quickly faded and the 13-8 second-favourite Abacadabras took over.

That he promptly looked to idle helped both Saint Roi and Jason The Militant close although Jack Kennedy ultimately managed to nurse Elliott’s star home to win.

“I got there way too soon. When it was Coeur Sublime beside me I wanted to get him under pressure as he hadn’t a run this season and my lad did. It worked out that I was there too soon and he idled in front. The line came in time,” Kennedy reported.

Abacadabras remains unchanged at a general 8-1 for Champion Hurdle glory but it was no surprise either that Saint Roi’s price hasn’t altered.

Off a stronger pace at Cheltenham in March his headstrong tendencies may not help but neither might they hinder him and Walsh so much.

Mullins certainly thinks so and said: “So much went wrong but there are a lot of positives to take out of it. He was beaten only a neck and in another couple of strides past the line he was probably in front.

“Mark was caught between a rock and a hard place. The ground is testing and he was hoping he’d drop the bridle halfway around. Then they all rushed by him at the second last and he found himself in a bad position but these things happen.

“I’m hoping what we learned about the horse today might be to our advantage the next day. I’d imagine Leopardstown at Christmas is the obvious route with him.”

Walsh had earlier also been narrowly edged out of the mares hurdle on another McManus favourite, Elimay, by her stable companion Buildmeupbuttercup.

The Mullins team scored too with Envoi Allen’s brother, Fighter Allen, in a maiden hurdle but as well as the big race Elliott was also dominant in both Grade 2 events.

Kennedy had little more than a steering job on Fury Road over hurdles while Rachael Blackmore upset the odds-on Latest Exhibition in the Florida Pearl Chase on board Pencilfulloflead.

“He jumps and he stays. They were Gordon’s words to me before we went out and that’s what he is,” Blackmore reported.

On testing ground Limerick’s Grade 1 novice highlight on St Stephen’s Day could come into the equation for the winner next.

On Saturday Elliott had a winner at Cheltenham with the Robbie Power ridden Duffle Coat and Irish raiders made their presence felt again on Sunday at jump racing’s HQ with a big-race double.

Henry De Bromhead’s Put The Kettle On overhauled another Arkle winner Duc Des Genievres on the run in of the Grade 2 Shloer Chase to put herself in the Champion Chase reckoning.

It was Power who teamed up with Emmet Mullins to land the Greatwood Hurdle on The Shunter.

The horse’s previous claim to fame had been when getting suspended from racing for 60 days under ‘Non-Trier’ rules at Tipperary in July. Mullins received a record €6,000 fine on that occasion.

It was a much happier outcome for the 13-2 winner this time, powering up the final hill to beat Ballyandy by three lengths. It justified Power doing 10st.

“That is the lightest weight I have done for about 10 years, I would say!” he joked.

“Emmet fancied him; the rain came - he is more of a two and a half miler, but with the rain coming, it brought stamina into play. I got badly outpaced down the hill, couldn’t go with them down the hill and had to sit and suffer, but he winged the second-last and I knew when I gave him a squeeze at the back of the second-last that I had every chance.

“I needed a good jump again at the last and he has delivered for me. Once I met the rising ground, he galloped all the way up the hill. Having a light weight on your back in that sort of ground makes a huge difference as well,” he added.