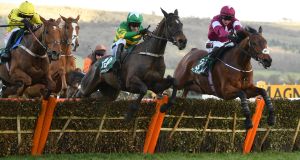 Willie Mullins has a remarkable 10th Unibet Morgiana Hurdle victory in a row in his sights at Punchestown on Sunday.

Saint Roi is odds-on to once more deliver the first Grade One hurdle of the winter to jump racing’s champion trainer and maintain a unique top-flight winning run.

Not even Aidan O’Brien’s record of 14 Irish Derby wins on the flat contains a continuous winning streak like Mullins’s in the Morgiana.

The same applies to O’Brien’s 16 successes in the Phoenix Stakes or even Mullins’s own 10 Irish Gold Cup victories.

However beginning with Thousand Stars in 2011, and through such stellar names as Hurricane Fly (2012-14) and Faugheen (2017,) jump racing’s dominant figure has maintained an overwhelming grip.

Having taken out last year’s hero Saldier, he relies solely this time on Saint Roi among the handful of runners for Sunday’s €100,000 feature.

The JP McManus owned star has been touted as a potential Champion Hurdle winner since comfortably winning the County at last year’s Cheltenham festival.

He did nothing to quench those hopes with a smooth return to action at Tipperary last month and still looks to be rapidly progressive.

Very short odds-on can’t be justified on ratings as Saint Roi has 2lbs to find with Abacadabras.

He has plenty to prove having finished only third to Aspire Tower on his own comeback at Down Royal recently while his former stable companion Coeur Sublime has a first start for Gearoid O’Loughlin.

That Mullins sends 10 horses to Punchestown on Saturday indicates how the winter campaign is really stepping up a gear.

The man who has been champion trainer for the last 13 years has saddled just 152 runners since the new season began although they have already provided 51 winners and almost E1 million in prizemoney.

Admittedly seven of the 10 runners on Saturday are in the one race, the €75,000 handicap chase, but the opener sees the chasing debut of the exciting Grade 1 winning novice hurdler Asterion Forlonge.

Having started favourite for the Supreme at Cheltenham last March, the grey threw away his chance by repeatedly jumping right.

Even if that habit hasn’t been ironed out it shouldn’t be an issue at Punchestown for the former point to point winner.

Paul Townend has opted for Tornado Flyer from the Mullins septet in the valuable handicap.

Despite topweight the seven-year-old could be ahead of the handicapper if beginning this campaign as well as last season after which his form did tail off.

Saturday’s black-type feature, the Grade 2 novice chase, looks a deep affair that still could wind up in a head to head between Darver Star and Felix Desjy.

Both impressed in their respective debuts over fences with Darver Star, placed in both the English and Irish Champion Hurdles last season, successful at Punchestown.

At the two mile trip around Saturday’s inner course however Felix Desjy’s pace-forcing style might be more effective.