Willie Mullins could have Cesarewitch double in his sights 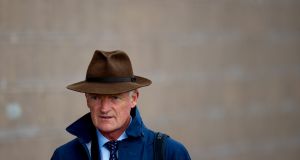 Champion jumps trainer Willie Mullins could have a Cesarewitch double in his sights on the flat this weekend.

Buildmeupbuttercup is already a general 5-1 favourite to give the Irishman back-to-back wins in Saturday’s Emirates English Cesarewitch.

This time he could also be represented in the race by both Great White Shark and Stratum.

The latter is also among half a dozen entries Mullins has left in Sunday’s €100,000 Tote Irish Cesarewitch. They also include the Stakes-winning mare Diamond Hill.

A total of 27 remain in the Curragh race which was won last year by Brazos.

The 2018 runner Davids Charm is on course to try and go one better and goes to HQ on the back of three wins in a row including last Sunday’s Grade Three hurdle at Tipperary.

In other news, Frankie Dettori’s services have been snapped up for Joseph O’Brien’s Master Of Reality in next month’s Melbourne Cup.

Dettori has failed to win Australia’s most famous race in 16 previous attempts although twice finished runner-up at Flemington.

Master Of Reality’s owner Lloyd Williams supplied Rekindling to win the Cup for O’Brien in 2017. Williams is a long-time friend of the Italian jockey who rode the owner’s Almandin in the race two years ago.

Richard Hannon’s exciting two-year-old Mums Tipple is finished for 2019 after a below-par run in the Middle Park Stakes.

Mums Tipple was found to be lame after losing his unbeaten record in the race won by Earthlight.

“He never ran his race in the Middle Park as he got a kick in the gates. He has had X-rays on the leg but is fine. He is gone for the year,” Hannon reported.

“We will get him ready now for next year and try to achieve what we think he is capable of. That defeat will have made a man of him,” he added.