Jockey is 10th to win Beresford Stakes at the Curragh for his father, trainer Aidan O’Brien 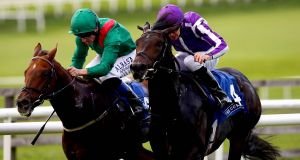 Donnacha O’Brien on board Innisfree comes home to win the Beresford Stakes at the Curragh Autumn Festival in Co Kildare on Sunday. Photograph: Ryan Byrne/Inpho

Donnacha O’Brien became the 10th jockey to win Sunday’s Beresford Stakes at the Curragh for his father Aidan when scoring on Innisfree.

It was a ninth successive win in the historic Group Two prize for O’Brien Snr, and a remarkable 19th in all dating back to Johan Cruyff in 1996.

Christy Roche rode him, while other famous names such as Kinane, Murtagh and Fallon are also on the roll of honour alongside the less-heralded Paul Scallan, who won on Lermontov 20 years ago.

Joseph O’Brien did his best by pulling off a Beresford hat-trick between 2012 and 2014, and it was the younger brother’s turn on the 4-6 favourite who confirmed Galway summer form with Shekhem in a thrilling finish.

Some of Ballydoyle’s top stars such as St Nicholas Abbey a decade ago and Japan last year have picked up the Beresford en route to better things, and Innisfree got 33-1 quotes for the 2020 derby, which is all but certain to be run on much better ground conditions than Sunday’s heavy ground.

“I was impressed with Shekhem in Listowel when he won and knew he’s no slouch,” the winning rider said. “My lad has improved from his maiden as well and there’s a bit of improvement in him.”

The Beresford’s big race pedigree is underlined by Japan being rated as the biggest threat to Enable’s chance of pulling off a historic hat-trick in the Prix de l’Arc de Triomphe in Paris next Sunday.

His stable companion, and Enable’s oldest rival, Magical, is also in the Arc mix, although O’Brien said it is too soon to know precise plans for Paris.

“I believe Japan’s going but I’m not sure what’s happening or where I am next Sunday,” the rider said.

Embroiled in a battle with Colin Keane to retain his jockeys’ title, O’Brien might even be tempted to skip the delights of Paris in October and ride closer to home in Tipperary next Sunday.

Innisfree’s victory took him to 89 winners for the season, two behind his rival who’d earlier beaten O’Brien into second when successful in the juvenile maiden on Pablo Diablo.

It was a happy outcome for Keane, who was limping after Saturday’s dramatic Middle Park Stakes where Siskin had to be withdrawn after getting upset in the stalls.

“I was surprised. I don’t know what happened to him,” admitted Keane, while trainer Ger Lyons reported Siskin a little stiff and sore but basically unharmed.

“More than likely he’s finished for the season. If he comes out bouncing next week we could have a decision to make about the Dewhurst, but I doubt it,” said Lyons, who predicted Royal Ascot’s Commonwealth Cup could be the target for the still-unbeaten colt in 2020.

Shane Foley had a much happier Newmarket experience, winning a first British Group One on Jessica Harrington’s Millisle in the Cheveley Park Stakes.

Foley maintained his momentum with a Curragh double on Champers Elysees and the 20-1 shot Kondratiev Wave, who looked to be on best of the ground on the far side in the opening maiden.

Apprentice Shane Crosse rode his first Group winner on Speak In Colours the day before and led home a Joseph O’Brien 1-2 in the Group Three Weld Park Stakes on board the 12-1 shot New York Girl. She had a neck in hand of her stable companion A New Dawn.

Johnny Murtagh’s Know It All faded to third in that race, but Murtagh later saddled a double as Borelli’s Nursery success added to that of Champers Elysees.

That was a 37th victory of the season for jockey Andy Slattery, who re-established his one-winner lead over Oisín Orr in the apprentice table. Orr had earlier briefly drawn level on the newcomer Katiba.