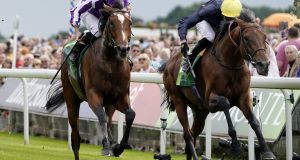 Aidan O’Brien has indicated Ryan Moore is likely to team up with Japan in Sunday’s Qatar Prix de l’Arc de Triomphe while his son Donnacha is set to partner Magical.

Ireland’s champion trainer is targeting a third victory in Europe’s greatest race which he first won a dozen years ago with Dylan Thomas, and also with Found leading home a famous Ballydoyle 1-2-3 in 2016.

This weekend’s Longchamp highlight is shaping to be the smallest field since Dylan Thomas beat 11 opponents. The list of entries was cut to 12 on Tuesday.

The line-up of hopefuls is dominated by the history-seeking Enable who is odds-on to record an unprecedented Arc hat-trick.

There is a supplementary stage on Wednesday but O’Brien is the strongest numerically with Anthony Van Dyck also still in the reckoning.

It is the three-year-old Japan and the star older mare Magical who are among the foremost challengers to Enable in the betting.

Moore rode both in their last races, including Magical in the Irish Champion Stakes.

However, O’Brien said on Tuesday: “It looks like Ryan will probably be on Japan and Donnacha on Magical.”

Moore has also won the Arc twice before, on Found and also on Workforce, who was successful in 2010.

The ride on Magical is a major opportunity for Donnacha O’Brien, however. The 21-year-old has ridden in the Arc twice before, finishing fourth on Order Of St George in 2017 and fifth on Capri a year ago.

Sunday’s €5 million renewal will be the culmination of a major Group One weekend which sees O’Brien planning top-flight strikes in France, England and the US.

O’Brien confirmed on Tuesday a two-pronged attack on Saturday night’s Grade One action in Keeneland.

Lordan was on board Van Beethoven when finishing runner-up to Valid Point in the Secretariat Stakes in Chicago in August. O’Brien has won the Shadwell Mile twice before with Landseer (2002) and Aussie Rules (2006).

However, Just Wonderful, third to Iridessa in the Matron Stakes over Irish Champions Weekend, will try to break new ground for her trainer in the fillies contest.

Hermosa is among O’Brien’s options for Saturday’s Sun Chariot Stakes at Newmarket and a likely clash with Iridessa and Laurens.

Ballydoyle also has options for Saturday’s Group One Prix de Royallieu with the trio of Peach Tree, South Sea Pearl and Simply Beautiful among 13 left in the race.

Enable’s trainer John Gosden looks to hold a strong hand in the €300,000 contest with the Oaks winner Anapurna joined by Lah Ti Dar and Erbihaar as possible starters.

Saturday’s other Group One at Longchamp is the long-distance Prix du Cadran in which Dermot Weld has left in Falcon Eight.

He is among a 10-strong entry that’s topped by Dee Ex Bee and includes two previous winners, Call The Wind and Mille Est Mille.

Weld’s Imaging is a possible for the Group Two Prix Daniel Wildenstein on Saturday although the colt could stay closer to home the following day for Tipperary’s Coolmore Concorde Stakes.

That is mixed flat programme and the growing momentum of the jumps campaign is underlined by Saturday’s Gowran card featuring the Grade Two PWC Champion Chase.

The top mare Shattered Love is among nine left in that while her stable companion Felix Desjy, a top-flight winner at Aintree in April, could make his debut over fences in a Beginners Chase.

In other news, Godolphin’s globetrotting star Benbatl is set to line up next in the Queen Elizabeth II Stakes over a mile at Ascot on British Champions Day.

Benbatl has won Group One races in Germany, Australia and Dubai and impressed on his return to action at Newmarket last week.

“A stiff mile is his best trip I think but he stays a mile and a quarter,” said his trainer Saeed Bin Suroor.

“I talked to Oisin (Murphy) and he agrees with me that the QEII is his race and I spoke to Sheikh Mohammed who gave me the green light.

“He’ll be okay with a bit of cut in the ground but we wouldn’t want it too soft.”