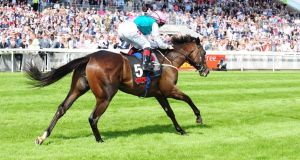 Siskin on his way to winning the Phoenix Stakes.

Ger Lyons has confirmed his Group One star Siskin won’t take on Pinatubo in this Saturday’s Darley Dewhurst Stakes at Newmarket and is finished for the season.

The Phoenix Stakes winner was lucky to escape serious injury when having to be withdrawn from last weekend’s Middle Park after rearing up in the stalls.

Such an uncharacteristic display from the unbeaten colt caught everyone by surprise but Siskin has the winter to recover from the incident.

“He’s fine and off for the season now,” Lyons said on Sunday after the Juddmonte owned star was inspected by Prince Khalid Abdualla’s racing manager, Lord Grimpthorpe. “Teddy saw him on Monday and made the call.”

Pinatubo will be the star attraction of the coming week’s Group One action although Jessica Harrington will aim to secure another top-flight success with Cayenne Pepper in Friday’s bet365 Fillies Mile.

Cayenne Pepper is unbeaten in three starts and is one of 10 left in Friday’s race after both Quadrilateral and Powerful Breeze were supplemented into it on Sunday.

Aidan O’Brien has left in both the Moyglare winner Love and the likely outsider Peaceful.

Donagh Meyler’s mount won three hurdles in a row last Spring, the last of them off an official mark of 106.

The point to point winner has had just a couple of runs over fences in the past but considering his hurdles form a chase mark of 87 is eye-catching.

1 Leo Cullen says rotation will be key as Leinster look to keep on winning
2 Paul Stirling’s heart over head decision to play on for Ireland bears fruit
3 Owens’s comments increase tensions ahead of FAI senior council meeting
4 Harding Park, named after a lousy US president who never stepped foot on it
5 GAA playing the long game as they await loosening of spectator restrictions
Real news has value SUBSCRIBE