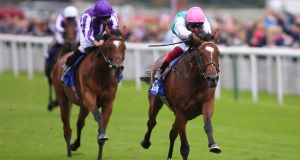 Frankie Dettori’s stellar career is proof of his ability to get it right when it counts. But even one of the all-time great jockeys will venture into new territory in terms of pressure when Enable bids for Qatar Prix de l’Arc de Triomphe history on Sunday.

Enable is one of eight horses to twice win European racing’s biggest prize. Only Treve has tried for a hat-trick and she failed in 2015, ironically behind the Dettori-ridden Golden Horn. So just after 3.00 Irish-time on Sunday history can be made at Longchamp – no pressure then!

Not since Sea The Stars’ Arc rout a decade ago will there be such widespread desire for one outcome. Enable boasts a near-perfect 13 from 14 race record including 10 Group Ones overall. She is the highest rated racehorse in the world right now. A third Arc could prove the perfect career swansong.

Such a fairytale outcome might tip the famously exuberant Dettori over the edge given he admits a fondness for this horse like no other. In a race containing runners from Japan, the Czech Republic, and two from Aidan O’Brien’s Ballydoyle empire, such emotion could become the international vernacular.

After a perfect unbeaten season Enable is understandably a red-hot favourite in the smallest Arc field for a dozen years since Dylan Thomas became the first of O’Brien’s two winners in French racing’s greatest race.

Those odds reflect how in achievement, and in most form terms, Enable is a stand-out. A small field means the draw isn’t a factor. Easy ground conditions aren’t either. She’s enjoyed a perfect preparation. All’s set for the picture perfect outcome, which is usually when the unexpected occurs.

Dettori knows that better than anyone. The Arc’s most successful ever rider was at his resourceful best when spoiling the Treve party four years ago, although helped by Treve’s jockey, Thierry Jarnet, delivering a cautiously insipid ride that smacked of a rider spooked by expectation.

Even Dettori’s appetite for attention might be tested by Sunday’s intense focus. If he’s famous for wild celebrations then a total of 248 career Group Ones – including 16 so far this year – is proof of ice-cool calculation at the business end.

He and Enable will have a target on their backs however, none more so than in relation to O’Brien’s pair of Japan and Magical.

The latter has a losing 4-0 record against Enable but goes there on the back of a confidence-boosting Irish Champion Stakes victory. She is a third Arc ride for O’Brien’s son Donnacha although Ryan Moore’s presence on Japan suggests he’s the Ballydoyle No. 1.

A line through Crystal Ocean however suggests that along with most of the field Japan has significant improvement to find to spring a shock.

The one form outlier though, and perhaps the sole logical reason for opposing Enable bar a hunch that a five year old mare at the end of a busy career might be vulnerable, is the French Derby winner Sottsass.

An improving three year old that’s enjoyed a classic French Arc preparation is always to be reckoned with. Sottsass overcame trouble to beat poor opposition in his trial and stamina doubts still linger about him. But he falls into a ‘could be anything’ category that might yet put it up to Enable.

Dettori might go into his Arc date with destiny having made it 250 Group Ones on Saturday.

The Italian teams up with his Oaks winner Anapurna in the Prix de Royallieu and a slow start didn’t help her chance in the Vermeille last time. Dettori is back on Dermot Weld’s Falcon Eight in the marathon Prix Du Cadran. He won on the Irish hope at Sandown in July.