Bryan Cooper set to resume this week after lengthy break 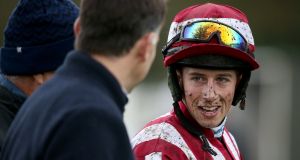 Brian Cooper: could return to action at Clonmel on Thursday. Photograph: Oisín Keniry/Inpho

Cheltenham Gold Cup-winning jockey Bryan Cooper plans to get back into action later this week after almost two months without race-riding.

The 27-year-old rider, who famously won the 2016 Gold Cup on Don Cossack, hasn’t ridden publicly since the start of August. But he could resume at Clonmel this Thursday and is looking forward to a winter campaign where his main support is likely to come from Co Wexford-based trainer Paul Nolan.

“I’m back riding out in the Nolan’s. They were a bit quiet with runners there lately so I just took the opportunity to get away for a few weeks and freshen up,” Cooper said on Monday.

At the weekend Davy Russell resumed race riding for the first time since the Galway festival, taking a similarly lengthy break to allow niggling injuries clear up.

Cooper took over from Russell as No.1 jockey to Michael O’Leary’s Gigginstown Stud operation in 2013 and enjoyed huge success for the Ryanair boss until losing the job in 2017.

In the 2015-16 season in Ireland he rode 94 winners but his fortunes have slumped since the split and he had 18 winners in Ireland last season, half of them for Nolan.

“He is probably the biggest yard I have behind him me at the minute. We’d a good relationship last year and there’s a nice bunch of horses for the winter so we’ll see how we get on,” he said.