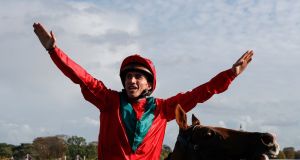 In the end Enable’s attempt to create history by becoming the first triple Qatar Prix de l’Arc de Triomphe winner came up short behind Waldgeist at Longchamp on Sunday.

The 4-6 favourite and Frankie Dettori looked to have the race in their grasp a furlong out only for a combination of testing ground and Waldgeist’s rousing finish to prove too much.

It meant no fairytale outcome for the English superstar but it took French racing’s ‘Napoleon’ to deliver Enable’s Arc ‘Waterloo.’

The last of Andre Fabre’s record seven Arc victories was 13 years before but France’s most successful ever trainer proved his genius once again when it counted in Paris on the first Sunday in October.

Waldgeist had been beaten by Enable on the three occasions they’d clashed previously which explained the winner’s 16-1 odds.

But having won Sunday’s preceding Group One with a new star two year old in Victor Ludorum, and combined with jockey Pierre-Charles Boudot, who’d ridden four Longchamp winners the day before, Fabre timed it right once again.

Before the race, when asked about Enable, he’d joked he didn’t want to be the one to kill Bambi: but in the final gruelling furlong Waldgeist ruthlessly pulled the trigger on masses willing Enable to pull off the unprecedented.

It was a first Arc for Boudot, a former French champion jockey, but Waldgeist’s victory meant a fourth decade with success in Europe’s greatest race for the 73 year old maestro in charge.

Fabre’s monumental career has seen him crowned champion trainer in France 29 times while achieving success around the globe, including all the English classics as well as beating the odds with Arcangues’ renowned 133-1 success in America’s Breeders Cup Classic in 1993.

Waldgeist’s unlikely victory hardly ranks as a comparable shock although it wasn’t just punter sentiment that made him a spoilsport victor for many of the overseas visitors.

Enable looked to have beaten off her principal new three year old opposition, Sottsass and Japan, only to be mugged by her old rival’s handsome wide thrust.

“Waldgeist outstayed her on the ground,” summed up Enable’s trainer John Gosden. “Unfortunately the rain came. She handles soft but hasn’t got that explosive turn of foot on it.”

The question of whether Enable, who was beaten for just the second time in her stellar career, might race once more this season before retirement was postponed for another day.

However for French racing, which has often had to play second fiddle in its own races recently, it was a morale-boosting first successful Arc defence in five years.

“It’s a very special race for me. Waldgeist carried my highest expectation. I knew the ground would be very testing but I look back to his days as a two year old when he won in the heavy and that made me more confident,” Fabre said.

“I’m very proud Waldgeist managed to beat such a fantastic mare. It’s well deserved in some ways,” he added.

Aidan O’Brien had to settle for fourth and fifth with Japan and Magical respectively and was runner up in the Prix de l’Opera when Fleeting couldn’t overhaul the 18-1 winner Villa Marina.

That frustration paled however since another Ballydoyle runner in the Opera, Goddess, had to be pulled up injured in the straight and was subsequently put down.

So Perfect was also runner up in the Abbaye behind the British hope Glass Slippers as another hot favourite Battaash failed to land the odds.

The strength of Jessica Harrington’s juvenile filly team was underlined once again with Albigna landing the Prix Marcel Boussac to earn 14-1 quotes for next year’s 1,000 Guineas.

Eight days after Millisle’s Cheveley Park success, Shane Foley brought the Irish filly through to win with authority in the closing stages.

“I wasn’t that confident as she had only run on good and good to firm so we were going into the unknown. But she showed the real Albigna that we see at home,” Harrington said.