Both meetings will be held behind closed doors; France suspend racing until April 15th 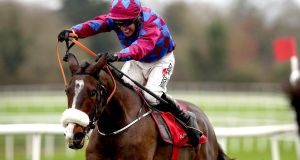 In unprecedented and fraught times racing has the St Patrick’s Day sporting stage almost entirely to itself.

Fixtures at both Wexford and Down Royal will take place behind closed doors as has been the case since Government guidelines restricting outside gatherings of more than 500 people were introduced last Thursday due to the spread of the coronavirus.

Since then racing has taken place at three fixtures in Ireland with no public allowed in to watch.

It has, however, facilitated the broadcasting of racing here on the subscription channel Racing TV as well as supplying pictures to betting shops.

Racing behind closed doors has been ongoing in other jurisdictions and Britain will replicate that policy starting on Tuesday.

However, on Monday the decision was taken in France to suspend the sport there until April 15th. Racing had been taking place in France behind closed doors.

Here a double-header taking place on a national holiday date made unrecognisable by the threat of Covid-19 is another logistical challenge for the sport.

Personnel crucial to racing taking place such as regulatory officials and integrity service providers have already been separated into teams to try and spread out any risk of infection form coronavirus.

With 159 horses declared for the two meetings there will be extensive travel for staff associated with runners.

Down Royal’s authorities made the decision to race behind closed doors last Thursday prior to Horse Racing Ireland issuing a directive.

It’s feature race on Tuesday is a €20,000 chase sponsored by Racing TV and which sees the Grand National entry Jury Duty return to action over fences.

For punters Delvino is likely to be an attractive proposition in the last on the back of a promising Navan debut behind Julies Stowaway.

Wexford’s seven-race programme gets under way at 2.05 with the Willie Mullins-trained Getaway Gorgeous a likely favourite.