Goshen to be aimed at Champion Hurdle after Cheltenham heartbreak 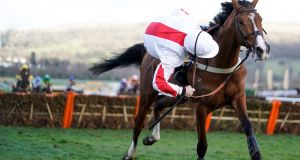 Jamie Moore is unseated from Goshen at the last in the Triumph Hurdle. Photograph: Alan Crowhurst/Getty

Gary Moore plans to train Goshen with next year’s Champion Hurdle in mind following his agonisingly unlucky defeat at Cheltenham.

He appeared to have the race under complete control until a mistake at the final flight led to him parting company with the trainer’s son Jamie Moore, who returned to the weighing room crestfallen and in tears.

While understandably gutted by Friday’s events, Moore senior is keen to look to the future.

“You always worry when they end up stood on two legs like he did, but he’s eaten up every day since and he’s been out for exercise this morning.

“It was disappointing, what happened — but it’s done now, and we move on. It looks like we’ve got a very good horse on our hands going forward, so that’s the positive to take out of it.”

Moore will consider upcoming options both over hurdles and on the Flat, before targeting a return to Prestbury Park in 12 months’ time.

A trip to Aintree’s Grand National meeting is unlikely, however.

Moore added: “Botox Has is going to Aintree — that’s been the plan for him for a while — and I don’t really want the two of them to take each other on.

“We’ll have a look at Punchestown or Auteuil for Goshen, or I might just go straight back on the Flat with him. He’s rated 88 on the Flat, and it would be a shame not to try and make the most of it.

“I think he is a Champion Hurdle horse, and that’s how I’ll be training him. He could go back on the Flat first, but what I do know is he’ll be in a field during June and July when the grass is at it’s best.”