Blackmore gets Honeysuckle out the gap in Mares Hurdle 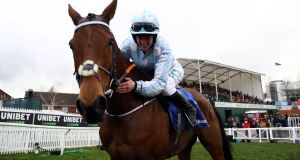 Having been a poster-act on the run up to Cheltenham the partnership of Honeysuckle and Rachael Blackmore delivered their lines with aplomb on Tuesday.

For once a much-anticipated head-to-head clash unfolded perfectly as Honeysuckle and her odds-on rival Benie Des Dieux faced the hill and delivered a storming finish to the Close Bros Mares Hurdle.

At the line the unbeaten 9-4 shot prevailed by half a length to deliver for both Blackmore and trainer Henry De Bromhead, who’d earlier landed the Arkle with the 16-1 outsider Put The Kettle On.

Blackmore was left frustrated in that earlier race, managing last on the winner’s stable companion Notebook, the 5-2 favourite.

Having been brought down in the first race, and settling for fifth in the Champion Hurdle on Petit Mouchoir, the jockey might have been forgiven for feeling bruised.

But if at the line Honeysuckle’s half length winning margin was the perfect balm there was general agreement too that it was Blackmore herself who engineered it a few furlongs beforehand.

Surrounded by a trio of Willie Mullins runners, including ‘Benie,’ Honeysuckle briefly looked in trouble after the second last only for an unlikely gap to suddenly materialise on the inside of Stormy Ireland.

Blackmore’s reaction was instant and decisive, driving the winner through as Paul Townend came around on her big rival.

“It was a great bit of race-riding to nip up the inside when Paul opted to go wide and it looks like it won her the race. Rachael had to sit and suffer for a bit but when the gap appeared she was gone,” De Bromhead said.

“Whatever about the mare, the lady on her back is something special - the pair of them are brilliant,” he added.

Even Mullins admitted to feeling dazed by what happened.

“I just think there was miscommunication turning for home. Maybe Robbie (Power) thought one of our horses was behind him rather than Honeysuckle.

“It looks like he gifted the winner a huge gap while Paul had to come round the outside. There you are, things happen. We won’t want to watch that again!” he said.

The woman herself, adding to her two winner festival haul in 2019, commented: “It’s a big week and I’m delighted. They (festival winners) get better nearly, you realise they’re so hard to get.”

For De Bromhead there was also satisfaction after Honeysuckle delivered in the Mares having been taken out of the Champion Hurdle last week.

Forty minutes earlier Epatante beat Darver Star by a lot further than Honeysuckle beat him in last month’s Irish Champion. In a results business the two outcomes will look a lot like vindication.

“You can’t think ‘I wish we’d run her in the Champion,” the Co Waterford trainer said. “We’ve just won the Mares. They quickened away from her for a few strides so what might they have done in a Champion?”

De Bromhead had earlier initiated a near 55-1 double as Put The Kettle On, one of just two mares in the Arkle, proved too strong under jockey Aidan Coleman. Blackmore endured a frustrating time on Notebook who once again was free to post and wasn’t helped by a false start.

In contrast Put The Kettle straightforwardly ran prominently at the front and had enough in hand to hold Fakir D’Oudairies by a length and a half.

“She made amazing progress since winning at Kilbeggan off 116!” De Bromhead said of a mare who had winning course form earlier in the season. “We said we’d back off her after November and then we just had to choose between this and the Marsh Chase.”

Gordon Elliott left it late to join the party on Day One having been runner up in the Supreme with Abracadabas while Galvin couldn’t overhaul Imperial Aura in the novices handicap chase.

However, the 12-1 shot Ravenhill dourly made the best of his way home in the festival’s longest race, the National Hunt Chase. It was third win in the race for jockey Jamie Codd who brought his overall festival tally to 10.

The third Irish winner of the day had just over two lengths in hand of the gallant pacesetter Lord Du Mesnil whose cause wasn’t helped by a blunder at the last.

The favourite Carefully Selected fell at the last when well beaten.