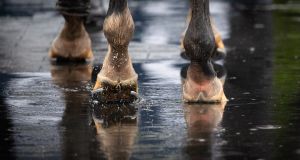 Wet weather conditions once again proved a spoilsport with the decision taken on Tuesday evening to cancel Wednesday’s programme at Punchestown.

“It got 21mms and isn’t fit for racing. There’s another 10 to 15mms still to come,” an Irish Horseracing Regulatory Board (IHRB) spokesman said. “We are in consultation with Horse Racing Ireland about a possible refixture early next week.”

The wet conditions also left Gowran Park waterlogged on Tuesday ahead of its refixed Red Mills Trial card, which is set for Friday.

However, with the weather forecast set to dry up somewhat later in the week the situation at Gowran is being monitored.

It is also being monitored for Thurles on Thursday. The going there is heavy but it is currently fit for racing.

Hopes remain that the weekend action at both Fairyhouse and Naas won’t be disrupted.

“At this stage there are no concerns about the weekend although we will continue to monitor the forecast,” the IHRB spokesman confirmed.

One of the Aintree Grand National favourites Burrows Saint could have his first start over fences in almost 15 months at Fairyhouse on Saturday.

The Willie Mullins-trained star is one of nine entries for the Bobbyjo Chase at the track where he enjoyed his finest hour by landing the 2019 Irish Grand National.

Subsequently Burrows Saint ran behind Fakir D’Oudairies in the Drinmore Chase in December of that year but just three starts following that have all been over hurdles.

The last of them was when out of the money behind Sam’s Profile in the Galmoy Hurdle last month.

Despite that run, he is still rated among the 12-1 favourites in some ante-post lists for jumping’s greatest test in April’s Aintree spectacular.

Burrows Saint got 10.13 when the National weights were announced last week and Mullins immediately nominated him as his best chance of adding to Hedgehunter’s Aintree victory in 2005.

“He will be fitter for his last run. I needed to get a run into him and it wasn’t our preferred option on the ground. But we had to go and take our chances and I think he’ll be better once the spring weather comes and the ground dries out a bit,” he said.

Mullins pointed to the Bobbyjo for both Burrows Saint and Acapella Bourgeois and both figure in the nine entries after Tuesday’s forfeit stage alongside another stable companion, Class Conti.

The Bobbyjo has proved a major Aintree trial over the years with its position in the programme coming in the wake of the National weights being revealed.

This year, however, the position of the National date itself could be fluid in the wake of the British government’s rollout plan for an easing of Covid-19 restrictions in England.

April 12th has been pencilled in for the possible reopening of non-essential retail outlets such as betting shops.

That is two days after racing’s biggest betting race of the year is due to be run at Aintree and momentum appears to be gathering behind the case for the National to be pushed back, either by a week or even a number of days.

“It is the one race where betting shops provide a big service. There are lots of once a year punters who want to come and have a bet on the big race,” said Simon Clare of Ladbrokes/Coral.

“The Grand National is the biggest betting race of the year. It is worth 10 times more than the Cheltenham Gold Cup, which is the second biggest in turnover.

“Obviously racing has done an amazing job being flexible during the pandemic. It’s been an amazing effort. It may not be possible. But if it can be done it would be fantastic,” he added.

Neither the British Horseracing Authority or the Jockey Club, which owns Aintree, commented on the matter on Tuesday.