Willie Mullins juggling anticipation and stoicism ahead of Cheltenham 2021 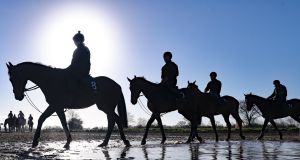 Ahead of next month’s Cheltenham festival - Kemboy, Kilcruit, Monkfish and Min at Willie Mullins’ stables in Closutton. Photograph: PA

With just three weeks to Cheltenham the festival’s dominant figure finds himself juggling a mixture of anticipation and stoicism.

When Willie Mullins describes as “astounding” the range of talents available to him for National Hunt racing’s greatest show it’s obvious even by his exalted standards this is something different.

The man with more festival winners than anyone else – 55 of the 72 in just the last decade – has a dozen ante-post favourites in the 28 races up for grabs.

Among a near 60-strong team he can look forward to sending to Gloucestershire are a host of other major chances to add to over a quarter of a century of sustained success.

Mullins himself is long odds-on to be the week’s leading trainer for an eighth time, almost as short as Chacun Pour Soi is to finally fill in the one notable gap on his handler’s CV in the Queen Mother Champion Chase.

Topping it all is the prospect of Al Boum Photo, the near-humdrum champion he calls “Joe Ordinary” who is on the verge of joining the most legendary names of all, Arkle, as a triple Gold Cup champion.

So in ordinary circumstances the festival run-in would be dominated by awe at such strength in depth and rueful pronouncements on whether such dominance by one man is good for the game overall.

Mullins is used to that, able to reasonably point to how most of his top horses were open for anyone to buy when they were young and untested. What no one is used to will be the extraordinary circumstances of Cheltenham 2021.

Even the logistical headaches thrown up by Brexit pale in comparison to the dire context of a pandemic which provokes massive negative connotations in the public consciousness when it comes to Cheltenham.

“You have to just go ahead and do what needs to be done and that’s the way I’m going. I’m not going to rail against it. There’s no point giving out. You have to do what has to be done,” Mullins said on Monday.

“Hopefully health issues on both sides of the Irish Sea keep getting better and it won’t impact on the meeting going ahead or anything like that. We keep going and jump all the hurdles put in front of us,” he added.

He was speaking on a Zoom media conference organised by the owners of Cheltenham, the Jockey Club, part of a British racing establishment still feeling the reputational blowback of last year’s festival coinciding with the first impact of coronavirus here.

Inevitably, Mullins was asked if the British Horseracing Authority might have been best served running the 2020 festival in the same behind closed doors conditions that will apply this time. Perhaps equally inevitably he responded with the straightest of straight bats.

“I think the BHA followed the government rules and the science advisors in England. They just went with the rules. Cheltenham, from what I can remember, mirrored the same British public life, workplace, pubs, transport, football matches, internationals, they were all going ahead. There were none of those stopped. I think no full lockdown was introduced until 10 days after that.

“So I couldn’t comment on what the government in England did. We were there, just players, no different than any of the Premiership soccer games and the rugby games that went on at the time. The European Cup matches they were all played, I don’t think any were stopped.

“The government are in charge. As far as I know Cheltenham were onto them and they took their guidance from government. It’s not something I have an opinion on. I was over there, like you, trying to do my job,” he said.

The fallout however means the upcoming festival is going to be an unfortunate anniversary for some rather than fulfilling its usual role of a joyous exhibition of jump racing at its best.

It’s a sombre context to overshadow the specifics of what horse passes the post first and threatens in particular to overshadow Al Boum Photo’s shot at a Gold Cup hat-trick. That however may be apt in the circumstances given the horse’s comparatively low-profile and his habit of simply getting the job done without any fuss.

“He’s very unremarkable, that’s the thing about him. When you see him in a field of horses he’s unremarkable.

“The only thing about him is he’s all about himself. He stands out when he’s on his own. He’s always looking out over the hedge or the roof. He wants to know what’s going on. But he just melts into a group of horses. He’s ordinary Joe,” Mullins said.

It hardly conforms to the image of the fiery flamboyant steeplechaser. Throw in his rare racecourse appearances and it’s little wonder the public has yet to warm to Al Boum Photo in a manner similar to the last Gold Cup hat-trick hero, Best Mate.

“If he’s able to go back there and do it three times he’s able to sit up there with any of them,” his trainer commented. “But that’s something we’ll worry about if he’s able to do it.”

Instead it is stable companions such as Chacun Pour Soi and Kilcruit, favourite to give Mullins an 11th victory in the Champion Bumper, who carry more obvious ‘x-factor’ into the festival.

But even doubts about whether amateur riders such as Mullins’s son Patrick are allowed compete at Cheltenham this year underline how different this festival will be. “My aim is to get horses and staff to Cheltenham. Whatever happens after that happens,” summed up the man sure to be at the heart of it.