‘If we get evidence we will certainly follow it up. But at this stage the case is closed’ 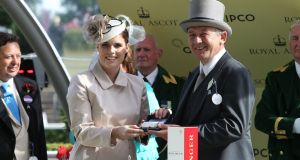 Trainer Charles Byrnes has been unsuccessful in his appeal against the decision of the Irish Horseracing Regulatory Board’s referrals committee to suspend his licence for six months and fine him. File photograph: PA

Irish racing’s regulator has insisted the sport in Ireland is clean.

On Thursday trainer Charles Byrnes had his appeal against a six month ban turned down after an appeals panel confirmed he was seriously negligent in relation to his runner Viking Hoard being ‘nobbled’ with a sedative at Tramore in 2018.

The panel agreed with a referrals committee conclusion that Byrnes was negligent in leaving Viking Hoard unattended for periods of time in the Tramore stable-yard.

After the horse, a drifter in the market, was pulled up he was found to have 100 times the screening limit for ACP in his system having been doped by an unidentified third party. Viking Hoard was also laid to lose by an unnamed overseas individual who used a so-called white label company to wager on the Betfair exchange.

Although there was no evidence of Byrnes being involved in doping the horse, or laying it to lose, the appeals panel chaired by Justice Nial Fennelly said the Co. Limerick trainer’s failure to ensure the horse was attended was “inexcusable.”

Byrnes estimated the horse was left unattended for between 20 and 25 minutes after his son Cathal delivered some horse rugs for a member of staff at Tramore and both went for lunch. The rules state that no horse can be left unattended.

Byrnes’ ban will begin in two weeks. He was also fined €1,000 and ordered to pay €2,000 in costs and expenses to the Irish Horseracing Regulatory Board.

The IHRB’s chief executive Denis Egan later said Byrnes has lost his licence to train for six months but that doesn’t mean he is a disqualified person or ‘warned off.’ He can continue to work in racing. Byrnes has two entries for a Punchestown fixture next Wednesday.

In his appeal last week the trainer said the loss of his licence would “be ruinous for him, that his employees would have to be let go and that the horses currently under his charge would have to be sent elsewhere.”

Egan said the IHRB is no closer to identifying the third party that doped Viking Hoard and neither is it aware of who specifically laid the horse to lose on Betfair.

“We’re always looking and if we get evidence we will certainly follow it up. But at this stage the case is closed unless some additional evidence comes forward,” he said.

“Ultimately it all goes back to the fact the trainer is responsible for everything to do with the horse and for ensuring the horse is not left unattended on the racecourse. If that had occurred we wouldn’t be looking for any unidentified third party,” Egan added.

In a press conference on Zoom, both Egan and the IHRB’s head of anti-doping, Dr Lynn Hillyer, emphasised their belief that Irish racing is clean. They pointed to how Viking Hoard is the first such doping case of its kind in Ireland in 30 years. Egan described it as an “isolated incident.”

Nevertheless it has proved hugely embarrassing for the sector including in relation to how Leopardstown is the only racecourse in the country with stable-yard CCTV for integrity purposes.

Last week Horse Racing Ireland, the sport’s ruling body, announced that up to €500,000 will be made available this year to install CCTV at every track’s stable-yard. It’s part of an overall revamp of anti-doping which will include lifetime tracing and out of competition testing.

Pointing to how Viking Hoard was doped in October of 2018, Hillyer commented: “Things have moved on, as you’d expect them to in two and a half years, and I’m looking forward to them moving on more this year.

“We’ve got a tremendous opportunity to show what we believe to be true that Irish racing is clean.”

Central to the new anti-doping regime will be authorised officer status granted to IHRB personnel by the government which gives them jurisdiction to enter premises, both licensed and unlicensed, and carry out drug testing.

Hillyer said those personnel are currently being trained and she expects them to be active on the ground “by the middle of the year.”

In other news top jockey Davy Russell will miss the Cheltenham festival after failing to recover from injury in time.

Russell has been sidelined since dislocating and fracturing vertebrae in a first fence fall in the Munster National at Limerick in October.

“I met with my surgeon earlier today and although he is delighted with the progress I have made he feels I’m not quite where I should be in order to ride at Cheltenham,” he said on Tuesday.

Russell talked the matter over with trainer Gordon Elliott and feels it is sensible to follow advice and pass up on mounts such as Envoi Allen in the Marsh Chase.

“To ride horses of the calibre of Envoi Allen you have to be 100 per cent fit, and I would be doing the team a disservice to ride when I’m not ready. Obviously, it is hugely disappointing, but it is important to make the call early,” he added.