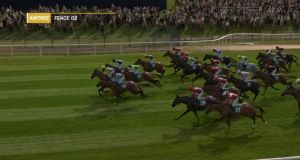 With the real thing cancelled amid the coronavirus pandemic that has seen all racing in Britain suspended until at least the end of April, the Virtual Grand National captured the imagination, with all bookmaker profits to be donated to NHS charities. Photo: ITV/PA Wirepermission from the copyright holder.

Bookmakers will donate profits of more than £2.6m (€2.9m) to NHS Charities Together after Saturday’s Virtual Grand National, which was “won” by the 18-1 chance Potters Corner. The audience for ITV’s broadcast of the race, meanwhile, peaked at nearly 5m viewers – around half the number that would have been expected to tune in to watch Tiger Roll attempt to win an unprecedented third successive National.

Bookmakers accepted bets on the race, in which the odds were fixed, up to a maximum of £10 each-way per horse. The average stake placed is reported to have been £2 per customer. The profits from bets placed in Ireland will be donated to Irish charities, including the Irish Red Cross.

“We are overwhelmed with the public support for the Virtual Grand National,” Michael Dugher, the chief executive of the Betting and Gaming Council, an umbrella body for gambling operators, said on Sunday. “When the nation was in much need of some light relief, millions joined in the fun in honour of one of Britain’s greatest sporting events and helped raise a fantastic amount for our brave heroes in the NHS.”

ITV broadcast a half-hour programme on Saturday that featured the virtual event at 5.15pm, the intended off time for the cancelled race. It had an average audience of 4.3m, a 28 per cent share, with a peak of 4.8m (30 per cent audience share). Last year’s Virtual Grand National attracted 737,000 viewers, while nearly 10m watched Tiger Roll land the race for the second year running.

The Grand National is by far the most watched horse race annually, and with most of the country at home due to the lockdown to fight the spread of coronavirus, the audience for this year’s virtual substitute compares favourably with the figure for many other high-profile events during the racing season.

The peak audience for the Cheltenham Gold Cup, which is run on a Friday, has averaged 1.6m over the past four years, while last year’s Derby, on the first Saturday in June, pulled in 1.75m viewers at peak. Royal Ascot in June last year, meanwhile, reached a daily average peak of 1.25m.

The computer programme used to create the virtual race took the form of 40 horses that were among the initial entries for the Grand National and produced a list of fixed odds on each runner’s chance, before using a random number generator to pick a 1-2-3-4.