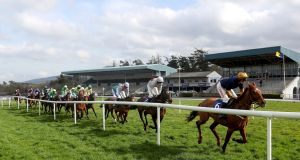 Racing at Clonmel Racecourse in Co Tipperary on March 24th, in front of empty stands due to the coronavirus pandemic. Photograph: Bryan Keane/Inpho

Brace yourselves, folks, for a paean to racing which, despite all its problems, remains the most magnificent triviality of all.

I know I’ve lost some of you already with that opinion. Even at the best of times the Sport of Kings is sporting Marmite. Now, at the worst, it’s in the reputational doghouse due to a sometimes cack-handed response to the Covid-19 pandemic.

Judged by the public outcry to the Cheltenham festival going ahead as planned, and a short period when racing here had the dubious distinction of staging the only live sport in Europe (apart from Belarusian football, of course), the old game feels a long way from being fashionable right now.

So it’s reassuring there’s a few hundred years of evidence to remind how the essential appeal of a galloping thoroughbred endures far beyond what’s in vogue.

Churchill came out with some rubbish in his time, but the old chancer was on the mark when pointing out how there’s something about the outside of a horse that’s good for the inside of a man.

Like anything, you either get that appeal or you don’t. What was notable about the fallout from Cheltenham especially was just how venomous some of the stereotypical criticism has been from those who’ve clearly never got it at all.

I am the last one to preach about venturing into unfamiliar sporting arenas and offering opinions rooted in little more than personal prejudices. A lack of expertise often means there’s nothing for it but sweeping generalisations laced with typecasting and a sprinkling of cliche.

It can be great fun and usually amounts to little more than some mischievous teasing of some dubious tastes. But there was a rancour to some of the push-button Cheltenham response that resonated of more than that.

Maybe it was to do with how the horror of Covid-19 only became real for many when news of the first person to die of the virus in Ireland emerged during the festival. Suddenly thousands of racegoers jammed together did look grotesque.

Allowing it to happen, though, was a call by Britain’s racing authorities. They chose to proceed as normal and consequently encourage every caricature about an insular sport full of entitled Hoorays thumbing their posh noses at everyone else.

Irish racing got caught in the critical blowback that owed much to hindsight. However, it was entirely responsible for its own subsequent tin-eared decision to keep racing here for longer than anywhere else.

The argument that such a move had Government approval is technically correct. But it left the racing tribe wide open to charges of being tone-deaf to the national mood.

It was a needless self-inflicted injury from an establishment hierarchy that really ought to be less cloth-eared to public opinion.

It’s ruling body, Horse Racing Ireland, will get more than €67 million of State money this year. It wants that increased to €98 million by 2024. The argument that such funding is justified by thousands of rural jobs and international investment is valid. But so is criticism of how the industry can operate.

Accusations of insularity and undue entitlement don’t come out of thin air. There’s a foundation to them that makes recent self-inflicted PR gaffes of minor significance compared to more substantial problems.

It’s a sector dragging its feet on much-needed change. That includes an anti-drugs regime capable of a basic requirement such as tracing a thoroughbred throughout its life. Or encouraging regulation that reassures the betting public that the unscrupulous aren’t simply taking the piss. Animal welfare, and being seen to make it a priority, will be the acid test of the industry in future.

The default reaction to criticism is too often to circle the wagons and opt for optics rather than the sort of meaningful change that could encourage the thoroughbred industry to transparently push what it’s got to offer.

Because despite everything, and despite reflex antagonism from those who just don’t get it, there are still plenty others for whom the best it has to offer will always be the best there is. That’s not trendy right now, but history is littered with evidence of how nothing dates faster than trendy.

Racing’s appeal has endured for centuries and will continue because there’s always a public ready to find beauty and excitement in the sight of thoroughbreds in full flight. Stir in the circus around that and you have as enthralling a human distraction as exists anywhere on the sporting spectrum.

Not everybody gets it. But millions do, traversing the cartoon spectrum from Hooray to betting shop cannon fodder and everyone in between, all revelling in the complexity of their obsession.

Racing isn’t straightforward. To fully appreciate it requires a depth of understanding that floating audiences, perhaps used to more one-dimensional action, quite reasonably decide they can do without. Nevertheless this is sport as chess rather than checkers. It’s sport for grown-ups.

That can be intimidating to the uninitiated. And yes, sometimes the racing world can seem an uncanny blur of self-absorbed elitism – although it’s hardly unique in that.

The old game still has drama and devilment, courage and skulduggery, beauty and ugliness, glory and sleaze

After all, plenty of us easily get how rugby is hardly immune to egocentrism too. The GAA is no stranger to crass behaviour. Your average golf club is an oasis of snobbishness, and there’s nothing quite so weird as those whose identity is so bound up in the League of Ireland. See how easy it is!

Proselytising isn’t really my style but fair’s fair. For all its problems, and all the flak, the old game still has drama and devilment, courage and skulduggery, beauty and ugliness, glory and sleaze, on a scale unmatched on the sporting panoply.

It’s about the horses at heart and that’s enough. But they can also produce the most human spectacle. The drama will be back before any other sport. It will hopefully be a sign of returning normality in these most abnormal of times. That’s surely a trivial prospect everyone can appreciate.